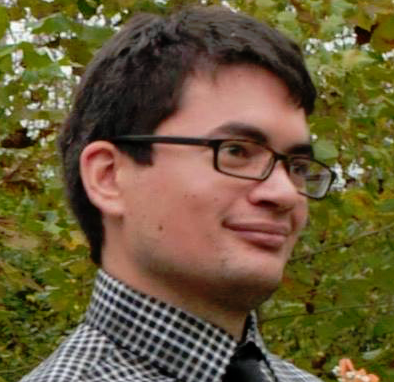 This interview is the third in a series of profiles on the great folks that work here at Hologram.This week, I spoke with our Operations Manager Logan Frederick. Logan, a 26-year old native of Columbus, Ohio, obtained his degree from Ohio State University.  His past employment includes positions at iLoan, Springleaf Financial Services, and JPMorgan Chase.  He is a Taurus, born in the year of the Horse, and his favorite colors are silver and green.Reserved and unabashedly nerdy, Logan surprised me by volunteering for this interview when no other hands were raised.Relieved to have a willing victim interviewee, I couldn’t wait to sit down and learn more about him.  Logan and I have worked closely together since he joined Hologram and I have come to appreciate him for his insight, dependability, and consistent high quality of work.I was not shocked to find that Logan was as rational and thoughtful in his personal endeavours as he is at work.  Deeply analytical and disarmingly earnest, the phrase “still waters run deep” perfectly describes Logan.Check out his answers to some of my questions below!

I found out that you self-taught yourself programming as a teen. Can you tell us more about how you came to that point, and how you accomplished that? I think a lot of people my age got into programming for one of two reasons: either to build their own websites or to make their own video games.  And, I went into it more for the former, to make my own website that was about videogames.  The biggest game our group played at the time was Super Smash Brothers Melee.  That is probably the game I have spent the most time on in my life.Any PC games?Yeah, Doom. Doom forever.You were telling me that learning programming in the mid 2000’s was kind of its own thing. Tell me a little more about that. I started programming at the end of 2005.  It was an interesting time because it was getting a lot easier to learn how to program because the internet was catching stride.  By 2005, Google had just gone public and any negative connotations the internet had from the .com bubble were now gone.And for my generation, we were too young for the .com bubble and we grew up with the internet, so we didn’t have any reservations about thinking the internet was a fad or anything like that.  There was a sweet spot in history during that time where there were now a lot of resources that made it easy to learn programming, and yet there were still a lot of things on the internet that had not been built, and both of those things provided the momentum to keep learning. It was a great time to learn programming.

When did you join the Hologram team and what drove you to join the Hologram team? I joined Hologram on April 11th of 2016.  I really wanted to move back to a startup and I wanted to be part of a smaller company that I could help grow.  Of all the companies that I looked at, it seemed very clear to me that the potential for Hologram was huge.Tell me a little about what you do at Hologram.So, my role at Hologram is pretty interesting insofar as I do a lot of different things and my role changes quite a bit.  When I joined, I was effectively the second non-engineering person on the team, with the goal of handling anything business related that wasn’t actively writing code.  So, when I first started, the four areas I handled were customer support, warehouse logistics, accounting, and analytics.  Now in the past month, my focus has shifted towards spending more time on data and analytics and leading our online advertising effort.What is something interesting you have been working on recently?My most interesting recent project is starting our online advertising initiative.  What is really interesting about that, and about online advertising in general, is that there are a lot of interesting challenges, both quantitative and qualitative.  I think that is the fun of online advertising.  It’s heavily quantitative, as far as figuring out how much to spend, what kind of people to target, and how to execute the management for lots of different ads for lots of different advertising channels, sites and networks.  Then, the qualitative part is figuring out what the ad copy should be and what page on the website customers should be directed to when they come in from ads.When thinking about the work culture at Hologram, what is it you enjoy?The quality about the office that I like is trust.  Because we are a small company, everyone has a lot of responsibility and autonomy.  To make that work for the company, everyone has to trust everyone else's opinions and ability to get things done.  And I think with the team that we have, we have a good foundation in that.

Getting to know the real Logan

It seems like you read a lot.  What genre of book is your favorite, and why do you gravitate towards those subjects?I predominantly read nonfiction around science, technology, economics, or finance.  I think these subjects go hand-in-hand, which is why I studied both computer science and finance and economics in college.  Economics, in my mind, encompasses all of social science.  I think there is some debate about where the social sciences will end up converging.  Because in studying psychology or economics or any other social science, you are basically studying how people work, and I find that very interesting.  Technology and science are also a big part of how people work.  Science and technology is about humanity trying to expand its knowledge base, and I think a lot about the concept of the “epistemic base”. My interests in technology and social science go hand-in-hand, since technology is an extension of our humanity.Tell me a fictional character you find interesting and one that you most associate with, and why? The two fictional characters that I am very interested in come from my favorite TV show and favorite novel, and are very closely related: Don Draper from Mad Men and Jay Gatsby from The Great Gatsby.  I think it's very interesting that both of them are people who seem accomplished to the outside world, yet they have internal regret or thoughts about what they could have done differently.  That internal psychological conflict is fascinating.  Now, a character that I more closely relate with is Frasier Crane from Frasier and Cheers.  He’s a smart person who does stupid things.  I don't know if it's too pretentious to identify oneself as smart, but…If you had one book to offer someone, in the hopes that it would foster a love for reading in them, what would it be? That is a really hard question because people are so different. It is very hard to find one book that would apply to a lot of people.  I’ll give you one fiction and one nonfiction option, okay?  I think there is a lot of value in taking very complex ideas, simplifying them and mainstreaming them, and I think one very recent book in that vein that is very consumable, but has very deep intellectual implications, is a book called But What If We’re Wrong, by Chuck Klosterman.  I think it's a very well written nonfiction book that anyone would enjoy reading, and would make them think.  I don’t know if that would inspire a love of reading, but I think anyone could read it and not regret it. The other approach would be a work of fiction for people who don’t enjoy nonfiction as much.  For fiction, it’s got to be something thought provoking but also readable.  I think all the Harry Potter books do a good job for kids and adults.  And again, I am partially biased, because I was the prime age for the Harry Potter books.That’s a perfect lead-in for my next question: what is your patronus?Oh man, that’s a good question!  I am surprised this question has not come up more in my life.  The one answer that comes to mind is an owl.[caption id="attachment_1707" align="aligncenter" width="648"]

Logan meeting Flo Rida![/caption]I know that you’ve been to Tangalooma.  Where is that and what were you doing there?The island of Tangalooma is a small coastal island off the coast of Brisbane, Australia.  I was there as part of a three week trip to Australia and New Zealand under a government program called People-To-People.  It’s a nationwide program where America exchanges kids with other countries for three weeks to have children learn about other cultures.  So, I went to Australia and New Zealand when I was 13 for three weeks.  The last two and a half days of the trip were spent on the island of Tangalooma.  It looked like an unreal advertisement for a tropical island.  Basically, we ate ice cream and played volleyball for two straight days.  It was definitely worth doing.  I don’t travel that much anymore, but it was valuable as a teen to have that experience. If you could bring one musician back from the dead, who would it be and why?Johnny Cash.  What about you?  [I answered that I would bring back Freddy Mercury.]  Good choice.  I think the thing Johnny Cash and Freddy Mercury have in common, even if they do differ artistically, is that there is something very artistic and very “themselves” about their music.What would be your “perfect” day?My perfect day would be spending all day in perfect 72 degree sunny weather at a coffee shop, just reading books, drinking coffee, and eating cake all day.What would you say is the most important quality of being successful? Answering this is probably presumptuous, to describe oneself as successful when our company is still growing. But to answer the question, I think, and I really am sort of taking this from one of the managers at my last job, but I very much agree with it, that the one word I would use, especially when working at a startup, is grit.   If you really want to get things done, and make things happen, if it's anything interesting and novel or new or difficult, there are always going to be a lot of challenges you have to overcome.  I think the personality trait that a person has to have to make things happen is grit.Tell us a secret, and make it interesting. Most people would not guess that I was born and raised a fan of the WWE (World Wrestling Entertainment).  I’m not a die-hard fan by any means, but I do still follow WWE and professional wrestling regularly.

We're more than just programmers. Get to know the people behind the brand in our Hologramers series.