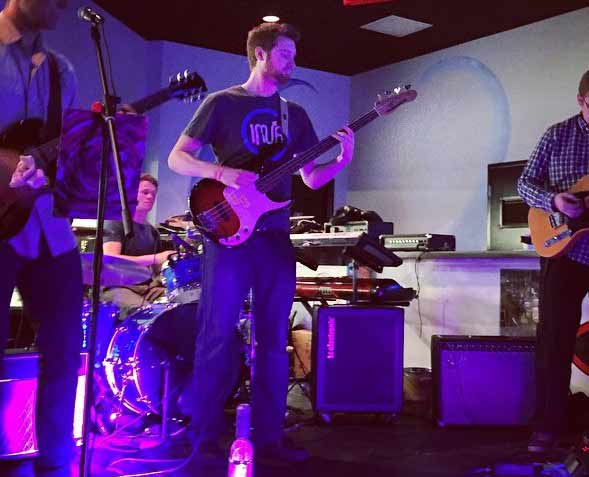 It's another installation of Hologramers! Each month, I get the opportunity to sit down with someone from our amazing team and share a bit about them and what makes them so wonderful. This week, I spoke with our Product Lead Pat Hogan. Pat is a 29-year old native of Acton, Massachusetts and obtained his Bachelor of Science degree in Computer Engineering from the University of Illinois at Urbana-Champaign. Before joining Hologram in 2014, Pat worked at Bytemobile, Citrix, and HokuScholars. A Capricorn born on Christmas Day in the year of the Rabbit, Pat lives in Chicago and his favorite color is teal.Unassuming and sincere, Pat is almost overwhelmingly easy to talk to, so it was inevitable that our conversation went far past the scheduled time. Despite having worked together since I joined Hologram in 2015, I discovered that there was much more to Pat than his candid demeanor and his tractable nature.Both philosophical and highly analytical, the best way I can find to describe Pat is as a Renaissance Man of the tech world, with broad knowledge in many aspects of both his professional and personal interests.

What drew you to work at Hologram? I was actually working at another startup previously with some close friends. It wasn’t generating any money yet, and after nine months of basically living off my own savings, I had lunch with Reuben (a former co-worker of mine), and he told me he had joined Konekt - Hologram was called Konekt at that point. They were looking for a part-time person to work on their website, so I joined and started building the website part-time. I quickly realized what these guys were doing was extremely cool. A few months later, it just naturally progressed to a full-time hire, and I have not looked back since. Tell us more about your work here at Hologram, and how it has evolved since you joined the company in 2014. I started out doing front end web development, and that evolved into my role as head front end developer. As we’ve grown, we’ve started building physical hardware and enhanced our networking and cloud infrastructure. My computer engineering degree helped me out with the hardware stuff, I could help with the back end stuff, and my previous job was actually in cellular network optimization. So, I had experience in all the aspects of the products that we were building. That led me into more of a full stack engineer role. Recently, I took on the Product Lead role, and now I basically am in charge of making sure the product is developed in the way that it needs to be. And that spans across all aspects of our stack, from the hardware to the firmware, to the networking side, into the REST API, into the dashboard and even up to the marketing site. I feel extremely lucky because I love every minute of what I am doing right now. In this role, I get to understand fully what's going around the entire product, get a vision of where we need to go, and bring that product to life. What is the most unusual thing that has happened to you while at Hologram? Because I work on all parts of the product, my backpack is usually full of strange things. The stuff I have in there is anything to with rewiring, circuit boards, screw drivers, batters, clippers.  Walking through airport security is always an exciting time, and definitely a challenge – my bags get checked a lot.

How did you choose engineering as your career path? It always seemed like I was going to be an engineer. My dad was an engineer and would always make me build projects. I wanted a new computer to play video games when I was a kid, and instead of buying one for me, he forced me to build my own. I think those types of projects made my mind work in a certain way. I don’t know if some of it was genetic, or if some of it was learned behavior, but it was pretty clear when I was half way through high school that I wanted to go into engineering. And that kind of helped me going through high school, because I knew I didn’t need to take any more French. Is there a teacher you have had in your life that had a substantial impact on you?  What impact did they have? Mr. Marshall was a math teacher who decided to teach a programming course in Java as an elective one year. I think he had eight in the class: my nerdy friends and I were the only ones that signed up for it. That was my first introduction to programming. The following semester he did a C and C++ elective that I also signed up for. We were this lucky group of kids who got exposure to programming in high school. The fact that I am able to be proficient in all these types of technologies started with that experience. I’m very thankful for that, and I think that started me on the path to where I am today.If you had to describe your life in one quote, what would it be? "Imagination is more important than knowledge" - Einstein. What are things that you do NOT like to do? I am really easy going so it’s hard for me to think of things I don’t like. I don’t put much energy toward feeling negative about things. It probably sounds odd, but if I do dislike something, I try to figure out the right perspective to make it that I don't mind it at all. What do you do with your free time? My main hobby is playing music. I’m in a band with a few friends. I was playing keyboard for a while, and in the last few years, I have picked up bass guitar. I purposely don't take lessons because that seems like work to me. I like to be really open and creative, and not have any boundaries when it comes to music.

Pat and the Blank Spaces[/caption] What's your band name? We’re called The Blank Spaces - before the Taylor Swift song came out.  So, that was just an unfortunate name for a band. But we have joked about doing a cover of that song, or becoming a Taylor Swift cover band just because of that. Any other hobbies? I love downhill skiing. I grew up on the East Coast and was captain of the ski team in high school. I enjoy taking skiing trips and finding difficult terrain – that gets pretty fun and intense.

Pat loves to ski[/caption] So, you're in a band, you're a proficient skier - what other surprises do you have Pat Hogan? Golf is the other sport that I do, but that's not very exciting. I grew up in Boston… Oh, I’m technically Australian; I am an Australian citizen.  Some people find that interesting. What was your dream job growing up? I think the earliest thing I wanted to be was an inventor. I wanted to come up with something that could change the world. What would I have wanted to invent? Probably something that would be impossibly good for the world. This next question comes from Logan: spaces or tabs? Spaces. [Long pause where I clearly did not understand the joke] Do you want me to explain the joke behind spaces and tabs? It’s an indentation thing in your code and how you want to view it. I go with spaces because it's consistent all the way out. A tab is not always the same. Mine is purely an aesthetic thing for certain syntax to be aligned when wrapped around to the next line. That's why I like spaces. Tell me a quirk or pet peeve you have that most people don’t know about. I could sleep forever. I think my co-workers have figured that out. I can sleep until, like, the end of time if there's nothing to wake me up. I would probably sleep 12 hours a night, if that was socially acceptable, or if there were 30 hours in the day. I love sleep. What is the biggest misconception people have about you?I wouldn’t consider myself nearly as nerdy as people think I am. They peg me as being into the stereotypical nerd life, but I really don’t spend much time on that kind of stuff. Tell us a little known fact about yourself. I have not had a birthday party since second grade, mainly due to the fact that I was born on Christmas. Now you have to pick the next interviewee, and give me an amazing question to ask them. Why don't we go with Joseph? He is the first one that came to mind. And I would like to ask Joseph: "What is the last text message that you sent?"

Learn more about our awesome employees in our Hologramers Series.