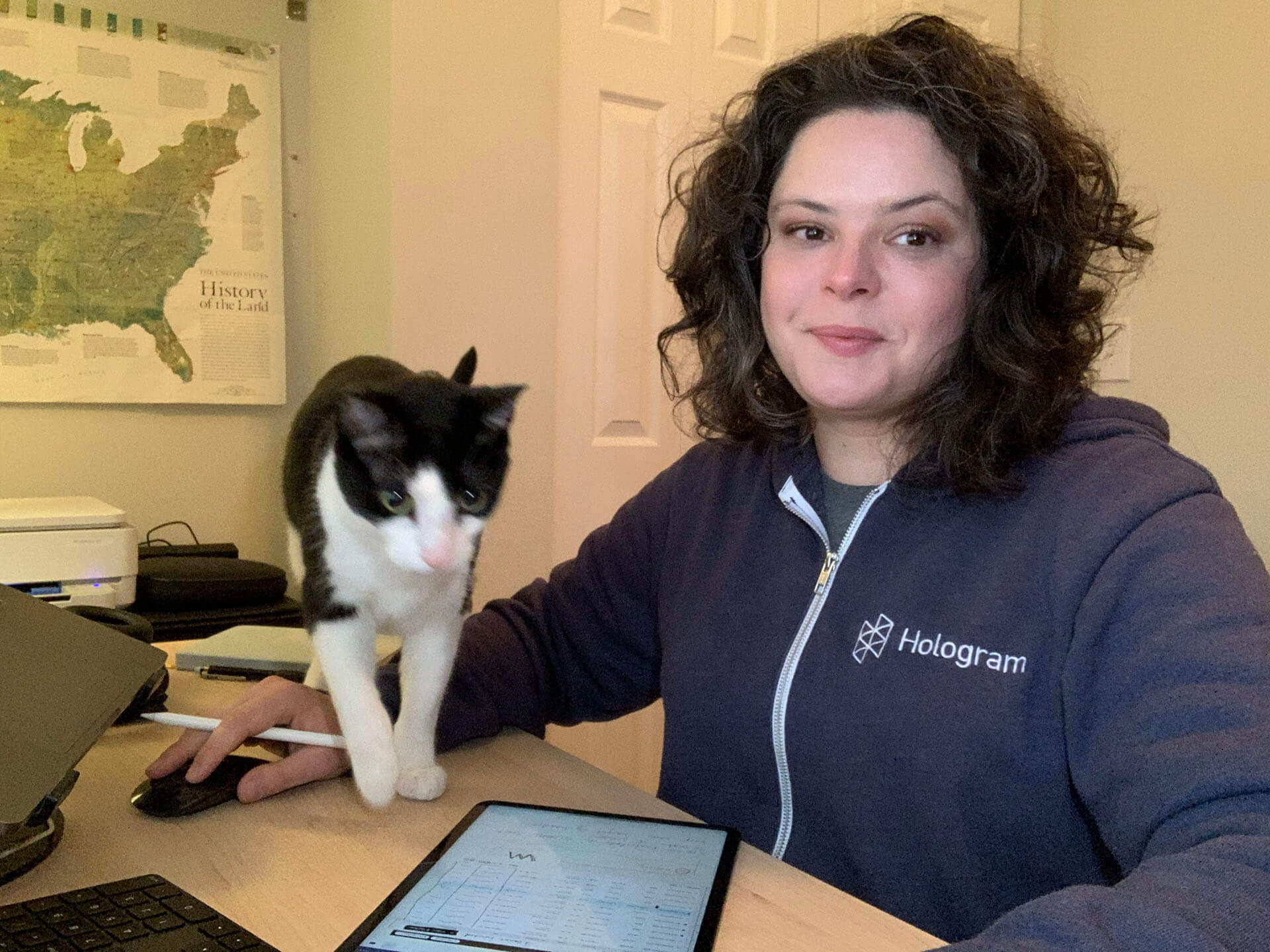 Looking for adventure? So were these three. Now they work with us.

Hologram’s philosophy on remote work honors the core value of transparency. Here’s a snapshot of what that means for onboarding new employees remotely.

It’s the year 2020. A pandemic has nearly paralyzed the world, and half of Doug Meirdiercks’ adopted home state of California is on fire. To cope, Doug is reading an apocalyptic novel called The Power in which teenage girls have immense physical strength and can destroy anyone in their path.

Oh, and he started a new job with Hologram, which hired him last month as Senior Marketing Automation Manager. “I like start-ups,” Doug says. “I love doing life-changing things.”

If there’s something Hologram’s most recent new employees have in common, it’s their love of start-ups — and their willingness to jump into an opportunity to shake up the world of cellular technology, regardless of the times.

Teresa Jimmerson, the company’s newest Product Designer, says she took the job not in spite of the pandemic, but because of it. “The pandemic further illustrated the possibilities and opportunities that Hologram allowed,” she says. She was initially attracted to the brand itself — she describes the website’s optics as beautiful, and designed to be accessible to everyone. But she was really sold after a series of interviews. “The level of professionalism and excitement was obvious,” she said.

Carlos Scherer, brought on last month as a Customer Success Engineer, says he can’t believe he works for a company where he can speak to the CEO every day. “I have the opportunity to really get involved in shaping the company,” he said. “I really like being in a company that’s applying new products, and disrupting the market.”

Hologram’s three newest employees are the first to be hired in the wake of the company’s decision to go completely remote. While Teresa lives in Chicago, Hologram’s headquarters, Carlos lives in Austin, Texas and Doug in San Francisco, California. All three say the company’s flexibility, enthusiasm, and level of excitement for the future drew them to join the team — and that they very much have felt part of that team, from the very first day of onboarding and as they transitioned into their roles.

“I was pretty impressed by how well organized and planned the onboarding process was at Hologram, said Carlos. “They had worksheets, guides and meetings already set up, meetings with people from all over Hologram. In each meeting you would meet new people and you would learn something new that would ‘unlock’ access to tools and platforms that help complete your worksheets and exercises. It was pretty great.”

“I was pretty impressed by how well organized and planned the onboarding process was at Hologram."

Teresa said the process even included instructions to “go for a walk” and “treat yourself to a fancy coffee” — suggestions she took to heart.

The newbies also remotely shadowed employees from each department to find out the inner workings of the company. “It gave me a healthy respect for the work my colleagues in different departments are doing,” said Doug.

Certainly, working remotely has its challenges. There’s no literal watercooler to stand around, and no ducking out with a co-worker to hit the nearby lunch buffet. But the year is 2020 — and there’s an app for that! Each of these employees has found opportunities to engage with other Hologram workers, and in this way has become part of the team - even if the team gets together on the screen.

You might not get the chance to meet them through screens. But we’ll introduce them right here in words. We think they’re worth the read.‍

Doug Meirdiercks grew up on an apple orchard in Saratoga Springs, NY. He’s the oldest of six, plus he has three step-siblings — he counts 60 first cousins among his closest relatives. As a teenager, he traveled to the Sunshine State to attend Florida Southern College, and - besides spending a lot of time at DisneyWorld - learned he had an art brain that didn’t mind working on tech stuff. He earned his degree in communication and public relations, and spent several years in marketing before venturing into marketing automation.

He caught the start-up bug years ago, and loves being part of building on a vision. “I really like interesting technology, disruptive technology,” he says. He enjoys working to better understand who the customers are, and what motivates them. Even better, he said, he likes the challenge of figuring out their biases and barriers, and helping overcome them.

His job requires him to interact with colleagues, and so even if he didn’t want to be a team player (he definitely does), he has to. “My role requires me to be highly collaborative cross-functionally because shared definitions of metrics and processes are essential to make the marketing, sales, and product functions work well,” he said.

In his off time, he hangs out with his wife and 15-year-old stepdaughter, a soccer phenom. He misses watching her play — the season has been wildly disrupted by COVID.

And he reads. The Power, currently on his nightstand -the book about teenage girls having superpowers — might seem like an odd fit for a 43-year-old. But for a man bent on changing the world AND living with a 15-year-old stepdaughter, it’s the perfect fit. ‍

Teresa Jimmerson grew up in south central Texas — the great state of breakfast tacos, she points out. But she has been in Chicago since arriving here in 2011 for a 2-month internship. “I fell in love with summertime, roof-time, everything about the city,” she says. She basically never left.

Teresa attended Texas State University at San Marcos, where she earned a fine arts degree in communication design and played competitive billiards. It’s a sport that has stuck with her — pre-COVID, she played on three different Chicago-area pool teams.

Teresa worked as a senior art director at FCB Chicago, product designer at Eight Bit Studios, and also product designer at an architectural firm. But she felt a desire to work for Hologram after her first interview. “You could tell everyone was committed to building the best platform for their customers. Transparency across teams seemed of the utmost importance and I was drawn to the opportunity to grow my career with dedicated folks,” she said. Hologram’s VP of Design Quintin Carlson was a big draw, she said. He and other team members had such excitement for the industry, and it was contagious.

“You could tell everyone was committed to building the best platform for their customers."

Although she works from home, she sometimes feels like she doesn’t. She interacts with other Hologram folks on various Hologram Slack channels, chit-chatting and finding similar interests. One of her favorite co-workers might be a bot named Donut, who has helped spur conversations on everything from favorite recipes to musical interests. Donut also helps set up virtual coffee dates where colleagues meet for small talk.

Teresa said she wouldn’t mind working in an office, but she’s grateful for the option to work remote. In her final interview, she felt obligated to confess that she might want to move back to Texas one day.

It wasn’t an issue. “They completely understand that we’re in a new world,” she says. But for now, she happily resides in Chicago’s Avondale neighborhood with her husband, who’s a chef, and two cats. They entertain themselves listening to psychedelic rock and outlaw country music and doing puzzles. ‍

Carlos Scherer spent a lot of time watching Hologram before being wooed by the company. “I was their provider,” he says, helping them solve technology and hardware problems as an employee of the tech giant Arm. He learned how the company did business, and marveled at how every employee pitched in to help the business grow.

Carlos grew up in Mexico, and earned an engineering degree in computer software at the Instituto Tecnológico in Monterrey. After working for tech companies in Mexico for several years, he moved to Austin, Texas two years ago to work for Arm as a customer onboarding engineer.

When he first heard about the opening at Hologram, he had been looking for a startup. He wanted to be at a place where he could help shape the company — where he wouldn’t be bogged down by micromanagement or limited by people questioning his ideas instead of listening to them.

That’s Hologram, he said, and “it’s very exciting.” As the company’s Senior Customer Success Engineer, he helps make sure clients understand what products will best serve their end goals, and how to take advantage of Hologram’s training and problem-solving programs.

He did worry about missing the proverbial watercooler — saying good morning to people, asking if they saw the previous night’s football game — and he does, a little bit. But he’s impressed by the company’s near insistence that employees interact socially with each other. The Slack channels allow for casual chatting, and the company’s transparency means frequent interaction, which has led to a familiarity between co-workers that very much creates a camaraderie.

When he’s not working with customers to help them change the world, he’s chasing around his 21-month-old daughter. And when he’s not doing that, he’s playing The Witcher 3 video game or planning the lineups for his three NFL fantasy league and four NFL survival league teams. “I love the NFL,” he says. Both Texas teams have losing records this season, but he’s nonplussed. He makes his own teams instead.

Doug, Teresa and Carlos have nearly four decades of experience between them, and at Hologram, we’re happily putting that expertise to work. We love Carlos’ approach to the NFL:  he’s not a rabid fan of any of the conventional teams, preferring to put together his own roster of winners. It’s a good strategy, we think. It certainly works for us.

Want to learn more about us and our open positions? Check out our careers page here!