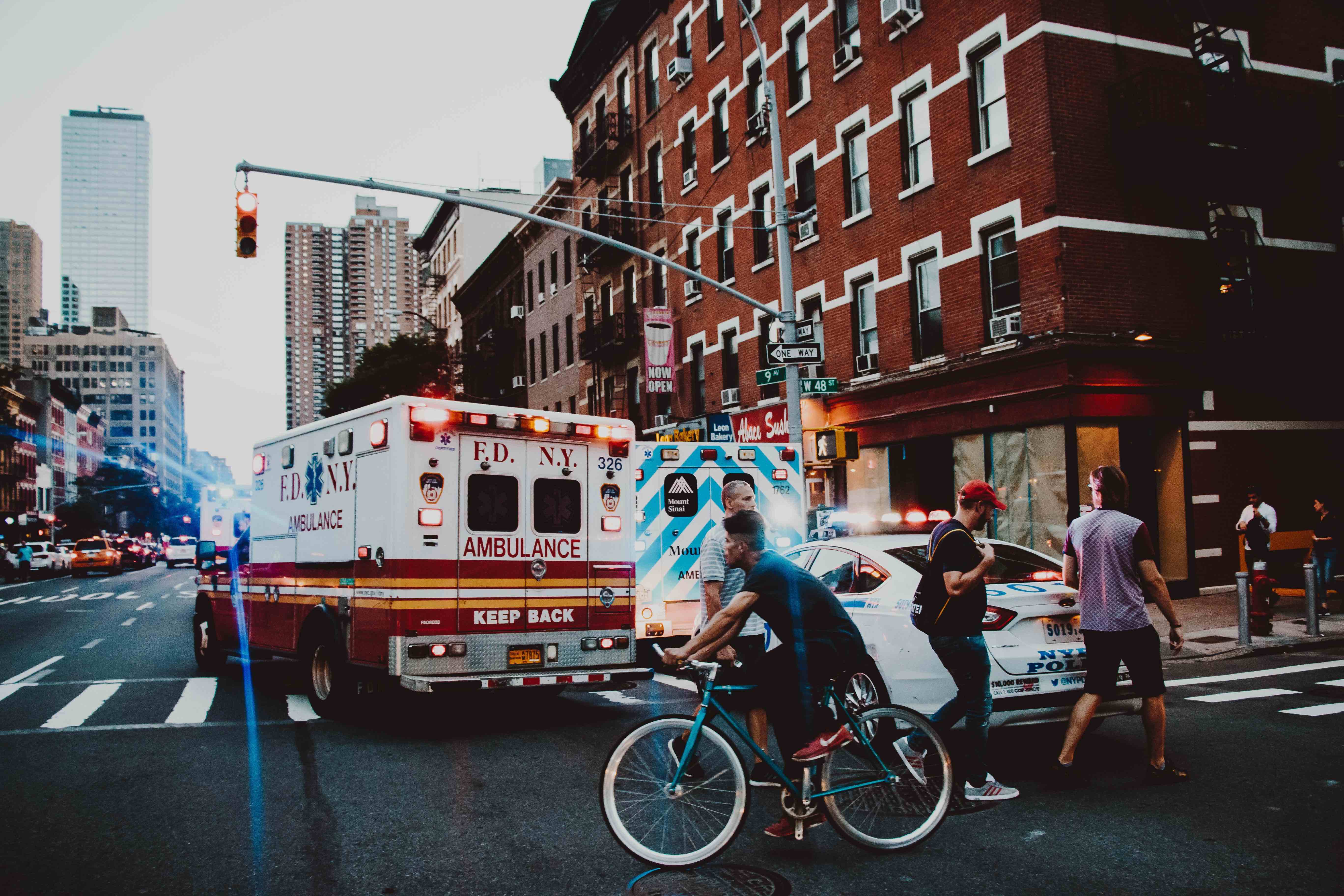 The Doctor is In… Your Computer

Today’s health technology is all about communication.

Paramedics in Florida become accustomed to dealing with the senior population. Older people get sick more often. They fall. And sometimes, to be honest, they're lonely and just need to talk to someone. But on this particular call, Captain Bob Snell could tell the woman in front of him was in trouble. She had severe abdominal pain; her husband had been trying to get her into the car, but her pain was debilitating.

Snell suspected the problem wasn’t her stomach. They loaded her into the rescue unit, and hooked her up to a 12-lead electrocardiogram monitor. Yep. The lines were as scribbled as a doctor’s handwriting. She was having a heart attack. (Abdominal pain is an infrequent but important symptom, especially for women.)

Captain Snell pushed a button on the monitor, and the ECG results zipped into the invisible pipeline that healthcare geeks call the IoMT - the Internet of Medical Things.

A few miles away, an ER doctor heard a ping, glanced at one of the ward’s computer monitors, and could see the exact image the paramedics had captured - an ‘electronic signature’ of the woman’s heart.

By the time the ambulance pulled up to the hospital, a cardiologist and team were assembled in a cardiac catheterization lab, ready to open up some arteries.

“We have a saying - time is muscle,” Snell says. “The faster the patient gets into surgery, the more heart muscle is saved.”

The 1970s television show Emergency!, starring Randolph Mantooth and Kevin Tighe, was one of the first to use medical drama as a plot device. It featured two (reasonably) hot paramedics rescuing people from weird and unlikely circumstances. The show reflected real life, though, in terms of the ability to remotely treat patients. The paramedics/actors used bandages, stethoscopes, and, in a pinch, steamy knowing glances to treat their patients.

Health care has come a long way since then, and not just in ambulances. Patients can visit with physicians remotely; diabetics wear devices that monitor their blood sugar. Even record-keeping has turned tech, with those old charts overflowing with papers being ditched in favor of digitized records.

That’s just the easy stuff. Even defibrillators and artificial hips are kind of ho-hum these days.

But what about a pill to treat mental illness that alerts caregivers when it’s ingested? Or a device that can measure oxygen levels, take blood pressure, and detect a temperature - and instantly send the resulting info to the doctor?

It's all about constant communication

Today’s health technology is all about communication, and when it comes to serious medical conditions, the availability of accurate, up-to-date information is crucial for patient care. It’s especially needed now, with hospitals and doctors discouraging office visits and Americans largely confined to their homes.

All of this means that the IoMT is having a moment. Now more than ever, the medical community is depending on technology to help them do their jobs. And increasingly, they’re using cellular connectivity to get data from place to place. Zoll, which makes the ambulance monitors described above, also has developed an “active monitoring” system to allow hospital doctors to watch a patient’s vital signs in real time. It’s currently being tested for FDA approval. The monitor can even tell when a paramedic is doing chest compressions, and a doctor miles away can tell how the heart is responding. It might not make for great tv - but it’s great at saving lives.

A few years ago, the health tech company VoCare was approached by physicians asking for what sounded like an impossible instrument - a device home health care aides could use to both measure a patient’s vitals and send the info where it needed to be. Currently, most aides carry different devices for everything - a stethoscope, a thermometer, a blood pressure cuff. They jot all the info down on paper, or on a computer app. It’s time-consuming, and cumbersome.

Nearly four years later, says VoCare Chief Financial Officer John Coccimiglio, the impossible instrument has become a reality, and is nearing final FDA approval. The doctors, he says, had wanted something easy to use and affordable, and could be redeployed - in other words, used for a patient, then wiped clean and used again.

The result is Vitals360, a rectangular device smaller than a smart phone. It can measure temperature, blood pressure, pulse, oxygen levels, and heart rhythm. Coccimiglio says it can also measure blood sugar, although that part has not been FDA-approved and will not be a part of the product’s first version.

Coccimiglio says there’s such a need for the product that physicians are already begging for the next incarnation of Vitals to have added capabilities. He envisions patients eventually using the Vitals360 themselves. Imagine, he says, a cardiologist wanting to keep a sick patient home as long as possible. Being able to monitor the patient’s stability would be critical in order to make that call.

Dr. Jaime Hatcher-Martin works in Atlanta for a telemedicine company. She’s a neurologist, and specializes in Parkinson’s Disease. She sees telemedicine  as the future.

Last month, she helped set up telemedicine guidelines for the American Academy of Neurology, specifically in response to the COVID-19 crisis.  “It used to be just for outpatient care,” she said. But now she’s finding it helpful for what used to be inpatient care, and even sometimes in emergencies. “A lot of people can’t drive,” she says, or just have a new tremor they want a doctor to see. Live video can help with that. But again, so can accurate medical information.

Diagnostics you can wear

Global Kinetics has introduced a product called the the PKG® Watch, a device worn on the wrist that records Parkinson’s symptoms and reminds patients when to take medication. The data collected includes when a patient is walking more slowly, having tremors, or having trouble moving. The watch produces a report, called a PKG, which is sent via cellular transmission to the patient’s doctor so prescriptions and instructions can be adjusted. It’s a game-changer for Parkinson’s patients, whose symptoms often need monitoring and evaluated.

Even on a bad day at his CrossFit gym, Sean Balabon can deadlift over 400 pounds, or more than twice his body weight. It’s a pretty neat feat for the affable 31-year-old digital marketer, who lives in the Jacksonville, Florida area with his beloved Weimaraner. Sean, who has Type I diabetes, usually checks his blood sugar before workouts - he only needs to glance down at his Apple Watch - but he doesn’t have to. His DexCom device, via a sensor patch, is already keeping track of it, and will let him know if his glucose numbers are off.

Ten years ago, his blood sugar levels got his attention differently. Balabon just passed out. He was getting hypoglycemic so often, his body adapted to it. “I blacked out five times,” he says. “I adapted to the feel of it. I’d wake up having Gatorade poured down my throat.”

Balabon’s device keeps constant track of his blood sugar. It’s paired with an app on his phone which can send his info to whoever he wants. For example, if his levels are off and he doesn’t respond to it within a certain period of time, it alerts his emergency contacts with both an alarm and a location. It could even alert his physician, if that’s what he wanted.

Balabon still needs a smart phone to help with his monitoring. It has to be nearby in order for him to be alerted, for example. But the IoMT moment is extending into the future, and before long, what seems revolutionary now will be logged into history as cumbersome.

VoCare’s John Coccimiglio foresees how his company will help streamline those lines of medical communication.

“Eventually, we’ll have wearables,” he says.

It won’t help Balabon with his deadlifts. But even if he forgets his phone at home, he can move some weight without fear of passing out. And he’ll no doubt call that progress.