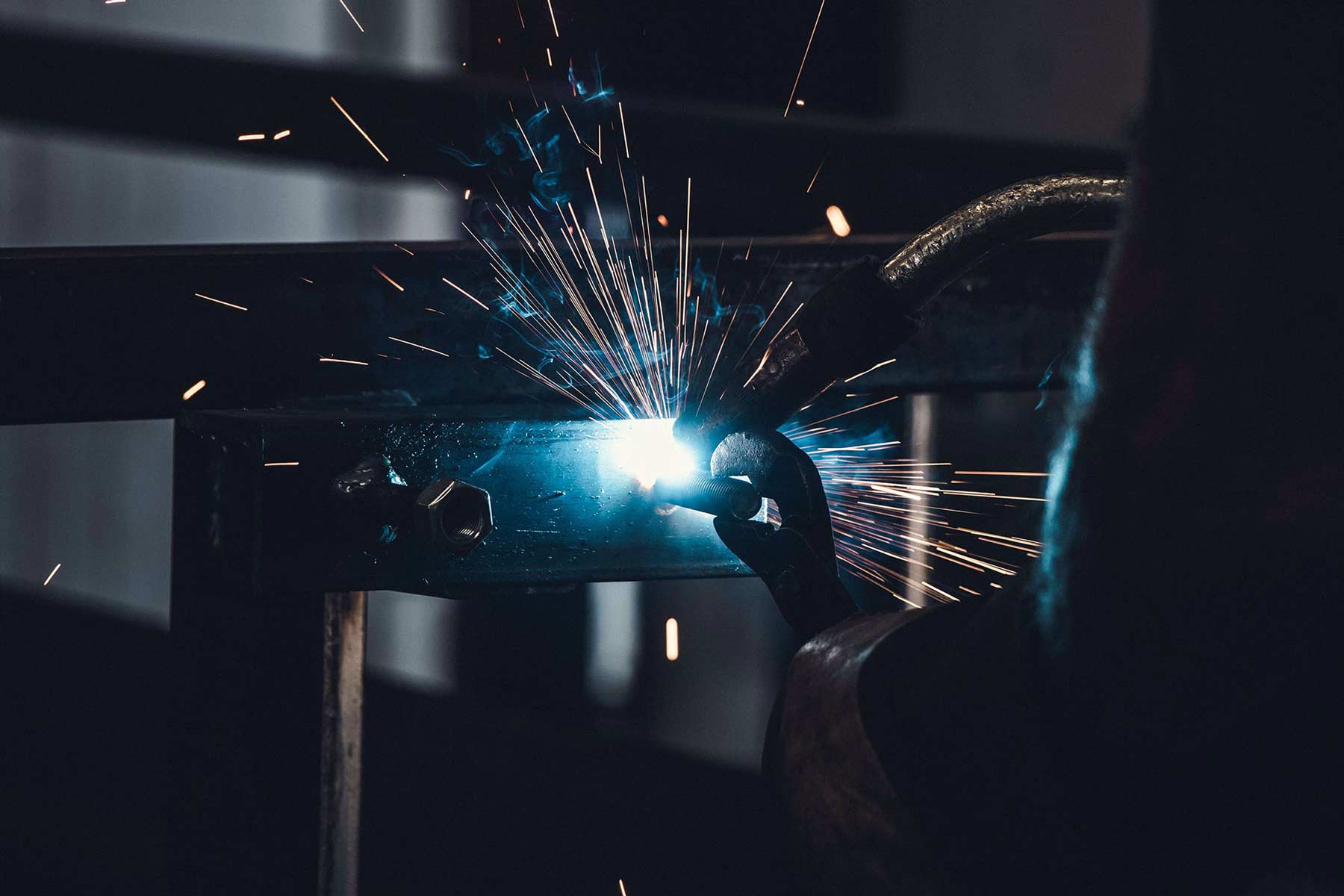 6 Forward-Thinking Applications of IoT in Manufacturing

Everything you need to know about how IoT is pushing the manufacturing industry forward.

Manufacturing companies benefit from incorporating modern technologies such as IoT sensors, AI, robotics, and machine learning in their workflows. Smart factories accelerate innovation, provide predictive maintenance and better data management, and save on costs. And digital transformation is on the way in more than just a few cutting-edge companies—according to a 2019 report, 81 percent of UK manufacturers are ready to invest in new digital technologies to boost productivity.

In this post, we’ll double down on how IoT is pushing the manufacturing industry forward and highlight 6 innovative applications.‍

Brief History of Technology in Manufacturing

Prior to the Industrial Revolution in the 18th century, skilled craftspeople made most commercially sold items by hand. The development of machines sparked the mechanization of productive tasks, leading to the factories and assembly lines of today. Machine-powered production lines meant a huge increase in yield and a reduction in costs. For example, the invention of a power loom allowed textile manufacturers to make cotton cloth much faster—and more cheaply—than before, which had an impact on the market.

Inventions like the steam engine and locomotive made way for mass production and distribution of goods of all kinds. Technology continued to develop and impact manufacturing throughout the 20th century.

In the 21st century, we’re experiencing another major shift in manufacturing. It goes by several terms, including smart factories, Industrial Internet of Things (IIoT), and Industry 4.0, and promises to (once again) revolutionize industry processes with new technologies like IoT sensors, AI, and data analytics.‍‍

Benefits of IoT in Manufacturing

IoT plays a pivotal role in realizing Industry 4.0. Connected sensors are placed on factory floor machinery and the data they yield can be used to predict maintenance needs, monitor workflows, drive productivity, and feed into larger company databases to run analytics reports. Here’s a closer look at some of the benefits of using IoT in manufacturing:‍

Knowing ahead of time when a factory robot is on the verge of breakdown is a huge advantage for manufacturing companies. IoT devices can provide that advance notification, allowing operators to deal with emerging problems before they cause unexpected (and costly) downtimes. But predictive maintenance also applies to the devices themselves—if it detects a problem in its own software or system, it can send an alert to the company through the IoT platform. In many cases, maintenance on both machinery and devices can be performed remotely.‍

IoT devices can also be used to monitor safety concerns like vehicle accidents, damage to machinery, and personnel absences. Wearable IoT devices can enhance safety for workers in higher-risk locations by monitoring their vital signs and movement—and during the COVID-19 pandemic, they can provide temperature checks and aid in enforcing social distancing protocols. Gathering this type of data also helps manufacturers track the facility’s compliance metrics and lower their insurance costs.‍

With IoT sensors at work, manufacturers can transform their quality control process from reactive to proactive. Using smart video, AI, and thermal sensors, products can be tracked much more closely throughout the production line. With IoT sensors monitoring the production machinery as well, manufacturers get a clear picture of product assembly and become aware of quality problems much sooner.‍

Asset tracking devices, including RFID tags, allow manufacturers to keep a much closer eye on inventory and productivity. IoT sensors and tags also allow for improved supply chain visibility. For example, a consumer goods company can use them to track the status of shipments across a continent, receiving immediate alerts if the goods are damaged or go missing en route.‍

In manufacturing, the gap between information technology (IT) and operational technology (OT) often leads to data silos and an incomplete picture of the company’s performance. The use of IoT sensors makes it possible to stream real-time information from a factory floor along with data from many other areas of operations into the same cloud platform. ‍

Current Challenges for IoT in the Manufacturing Industry

While IoT promises to offer many benefits to manufacturers, some challenges remain. Let’s take a look at a few of the obstacles manufacturing companies need to consider before diving into IoT adoption:‍

We’ve said it before and we’ll say it again: security remains a top concern for IoT deployments. As a new and uncharted terrain, the world of IoT involves many endpoints that can become doorways for hackers. In particular, industrial IoT security is a point of stress because dependence on a single IT system means potential for tremendous damage if that system is compromised. If there’s a vulnerability in the software, hackers could take control of devices and start manipulating their behavior. Security standards for industrial IoT are beginning to emerge, and they will bring more protection and peace of mind for companies interested in adopting new technologies. ‍

With so many IoT providers and device types out there, interoperability between systems is another major hurdle. Manufacturers also often have legacy equipment that wasn’t built for IoT connectivity, so IoT solutions need to be able to connect with many different types of machines, software, and systems to function well. ‍

Implementing new technology that touches every aspect of a manufacturing facility is inevitably an expensive endeavor, especially when it involves hiring a third-party developer to create a customized solution. Some companies remain reluctant to invest in IoT, unsure of the returns they’ll reap—but many more are convinced of the technology’s value and ready to take the leap.‍

6 Applications of IoT in Manufacturing

Now, let’s take a closer look at some interesting applications of IoT in manufacturing.‍

A digital twin is a highly detailed digitized version of a physical object. In manufacturing, digital twins can be used to create simulations and test decisions and outcomes before physically constructing anything. IoT sensors in the factory feed data into the digital twin to aid in creating simulations and tests that are based on reality. This technology is especially useful for new product development.‍

Using connected augmented reality (AR)-equipped smart glasses, workers at a manufacturing facility can look at a broken piece of equipment and see—through a digitally overlaid image—exactly where the problem lies. Some smart glasses technology allows users to connect with an expert (who might be upstairs or halfway around the world) who can advise them on how to make repairs. ‍

Combining machine learning with data from IoT sensors, manufacturers can create self-dependent systems that predict problems, diagnose them, and fix them without human intervention. These self-dependent systems can save immense amounts of time and effort and increase productivity for workers who are freed up to focus on other things.‍

Combined with a cloud computing model, IoT sensors in a manufacturing facility can pave the way for remote production control. Managers have enough detailed information on field devices to be able to make decisions and execute control from afar. With systems centralized in this way, manufacturers get better real-time production data and are able to combine it with enterprise data to create a clear picture that helps them make better choices.

While free-roaming robots may still be science fiction to some factory workers, other manufacturing plants are embracing this emerging technology. With the advent of IoT and enhanced wireless connectivity, some robots are able to navigate through a manufacturing facility safely, carrying goods from one place to another.‍

Successful Examples of IoT in Manufacturing

While IoT is still relatively new, many manufacturers are already incorporating it with great success. Let’s take a look at a few examples.

Aerospace giant Airbus is using IoT sensors to aid in high-precision aircraft assembly. With millions of components that must be assembled in very specific ways, aircraft assembly is a complex process with very little margin for error. Airbus uses IoT sensors to monitor machines and tools on the factory floor and equips workers with wearable devices, including smart glasses, to increase safety and accuracy.‍

Global company North Star BlueScope Steel is using wearable IoT technology in its facilities to keep workers safe. Connected helmets and wristbands provide real-time health data. The system analyzes the data and sends out an alert to managers if it senses a dangerous situation—for example, if the worker’s skin temperature and heart rate are elevated and they do not move for a period of time, they could be experiencing heat stress. North Star BlueScope Steel is also using IoT sensors to monitor environmental hazards like toxic gases and radiation in their facilities.‍

A Japan-based heavy equipment manufacturer, Komatsu has successfully deployed IoT sensors on its fleet of robots, making a way for managers to keep an eye on operations in real-time, even if they’re halfway around the world. Having access to this information has helped Komatsu reduce downtime and increase manufacturing output. The company is also set to adopt a combination of AI and edge computing to make data processing even more streamlined.

A leader in the field of agriculture, John Deere is exploring the possibilities of IoT in its factories, using an IIoT platform and sensors to gather and assess information in real-time. (The company also embraces IoT in its products, with everything from self-driving tractors to smart agriculture apps that track field activity.)‍

The Future of IoT in Manufacturing

In the future, IoT will likely become more and more central to manufacturing operations of all kinds. One likely shift is the addition of more computing power at the network edge. Rather than sending IoT data back to the cloud, much of it will be processed onsite. Keeping sensitive information on-premise will provide added security and help to reduce bandwidth consumption and related costs.

As Industry 4.0 unfolds, manufacturing will become increasingly “smart”—or automated—and workers will be freed from rote tasks to focus more on management and innovation.