Light as a Feather

Jared Wolff is a volunteer firefighter building a new open-source hardware board for tracking everything from air quality to where you parked your bicycle.
Features
Tricia Booker
July 23, 2020 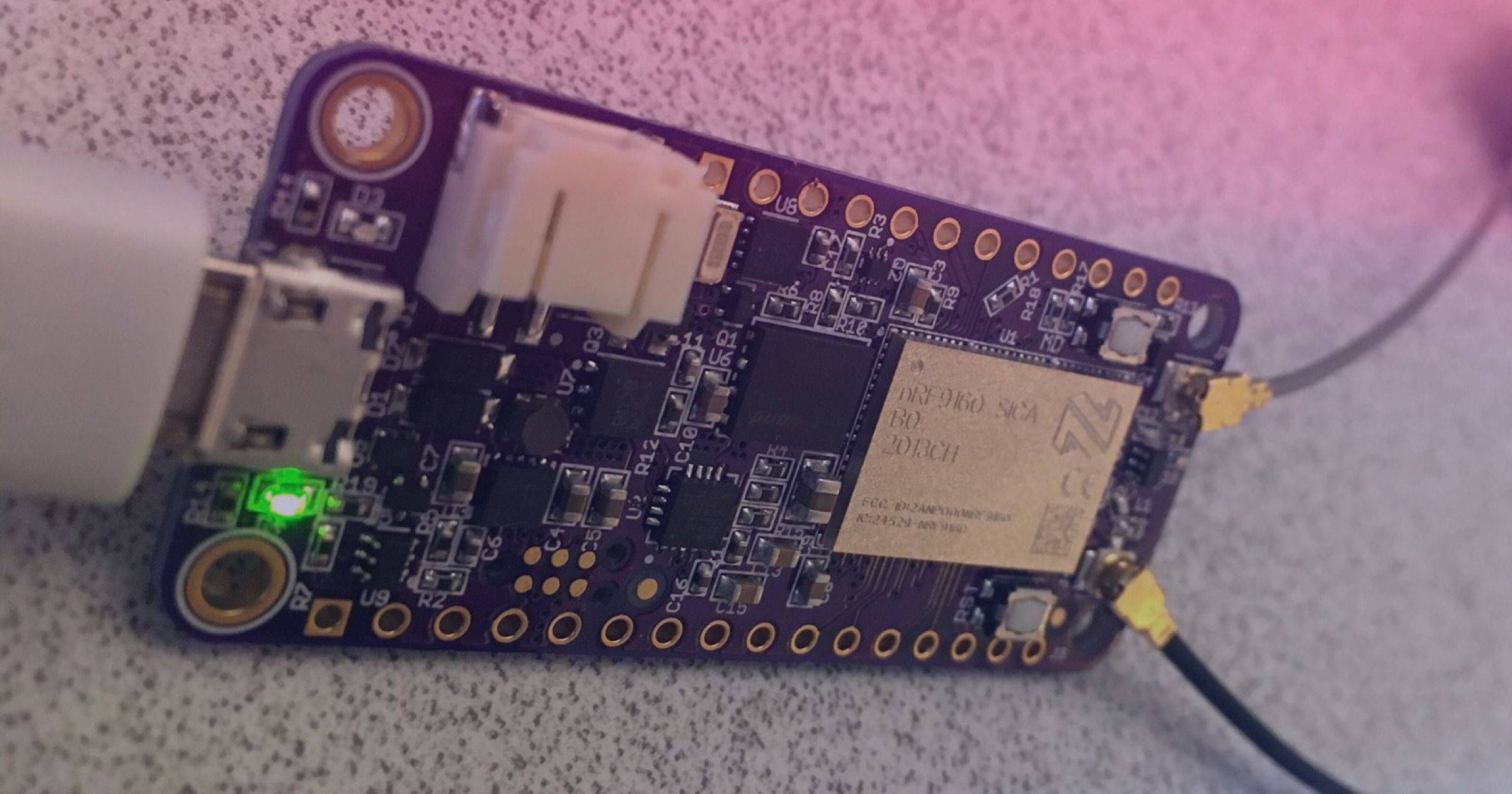 Jared Wolff (https://www.jaredwolff.com) was maybe five years old when his father sat him in front of a computer and showed him how to digitally paint with a mouse. It was kind of cool - and even cooler when he figured out how to start the thing up on his own.

The true harbinger of his tech acumen didn’t emerge until he was in second grade, and fixed the sound on his family’s Apple computer. What followed, though, were years of experimental destruction. “I spent a lot of time breaking things,” he says. Now he spends his time fixing things - and creating solutions to the endless supply of challenges that accompanies modern tech advances.

His latest invention is the nRF9160 Feather (https://www.jaredwolff.com/store/nrf9160-feather/), a circuit board about the size and shape of a Captain’s Wafers cracker, or half of a Heath bar (though not as delicious-looking). It has several pins for connecting external sensors and communicating with other micro-controllers, and even has a modem that can communicate all this data via cellular connectivity. More simply, he says, it’s a tiny computer that can talk to the internet.

When connected to devices, the Feather has endless capabilities - it can measure temperature and humidity from afar, serve as a security measure to track bicycle locations, be used as a central hub to gather info it sends on to servers - it not only eliminates some existing logistical challenges, it also solves problems that haven’t yet emerged. Similar technology exists, says Wolff. But this baby is smaller and less complex, which translates into increased usability with a slew of possible applications. Soon, it will include a GPS. It could be, Wolff says, a game-changer.

From New York, to Silicon Valley, to Taiwan

Wolff grew up in New York and attended Rochester Institute of Technology, where he studied engineering and communication. He originally was interested in being a mechanical engineer - but while in college, he built his first circuit board, and computer engineering became his jam. In college, he also worked as a computer consultant for the RIT community, and as an intern for Apple, helping with the launch of three iPod products.

After college, he headed for tech Mecca - Silicon Valley. By this time, he had immersed himself in hardware, and worked for a series of companies doing computer hardware engineering. He wasn’t really thinking too much about anything other than paying off school loans, he says. He worked hard, but he played hard, too. He discovered a love of motorcycles, and took an epic trip to Alaska on his BMW and other shorter trips throughout the western U.S.

One day, a friend told him about a Mandarin Chinese language class he had been taking. On a lark, Wolff joined the class, and found that he loved it, and actually had a knack for it. Wolff had been to China several times, but decided to try out his new language skills in Taiwan - a decision that would change his life.

“If you impart knowledge on the next generation, they’ll be able to do the same thing we’re doing, and more.”

He loved the country - its infrastructure, the food, and the people. Especially the people - while there, he met his future wife, who sells computer accessories. The two now make their home in Connecticut, where Wolff runs his own company - Circuit Dojo (https://www.circuitdojo.org), a company dedicated to teaching people how to achieve their technology goals. The idea had come to him years earlier, while immersed in Silicon Valley life.

Wolff, in addition to working full-time in the Bay area, had begun a blog to chronicle his own experimentation with computer technology. People wrote in to him with comments and questions, and he began to notice how impassioned and accomplished he felt when he educated readers enough to enable them to build their own hardware. The sentiment led to the mantra of Circuit Dojo, splayed across his home page:

Dojo, of course, is a Japanese word referring to a place of immersive learning, which is exactly what Wolff hopes Circuit Dojo provides. Beyond the business angle, though, he also yearns to help provide tech-based learning opportunities for anyone who wants them. “There are a lot of people not as lucky as I was,” he says. “If you impart knowledge on the next generation, they’ll be able to do the same thing we’re doing, and more.” He’d like to eventually start a scholarship program. He’d love to help students, for example, achieve enough success that they’re thinking, “Holy crap, I can do this! I can take over the world!”

Wolff hasn’t (yet) taken over the world, but he’s doing his part to change it. When California was going through its awful spate of wildfires, he had friends there who were concerned about their air quality. He developed a device supersensitive to particulates in the air, which reports back to Wolff’s dashboard. “I can tell when they’re cooking,” he said. The device has also been strapped to the top of an airport vehicle and driven around the tarmacs to measure air quality in the area (hint: not good). He has shipped it internationally, to Australia and the United Kingdom. It’s possible, he says, to hook the air quality device up to the Feather to further increase durability and accuracy.

He had still been working on air quality devices, in fact, when the pandemic hit, and many of his clients took a hiatus. With plenty of time on his hands, he began to focus on creating a new Nordic board, one that would combine the best factors of all previous renditions. Within three months, he had perfected the nRF9160 Feather.

At age 32, Wolff envisions lots more tech in his future - but lots that isn’t tech, too. When he’s not developing hardware or doling out advice, he’s a volunteer firefighter. During COVID, he has enjoyed showing up in parades to celebrate kids’ birthdays, and he also likes utilizing skills needed to help save lives.

“As much as I like sitting in front of a computer, I don’t want to do it all day,” he says.

The nRF9160 Feather (https://www.jaredwolff.com/store/nrf9160-feather/) launches this week with a Hologram Hyper (/products/hyper) SIM card, allowing it to connect to 550+ networks across 200+ countries worldwide. It’s not quite as light as a feather. But much like Jared Wolff, it’s loaded with possibilities.