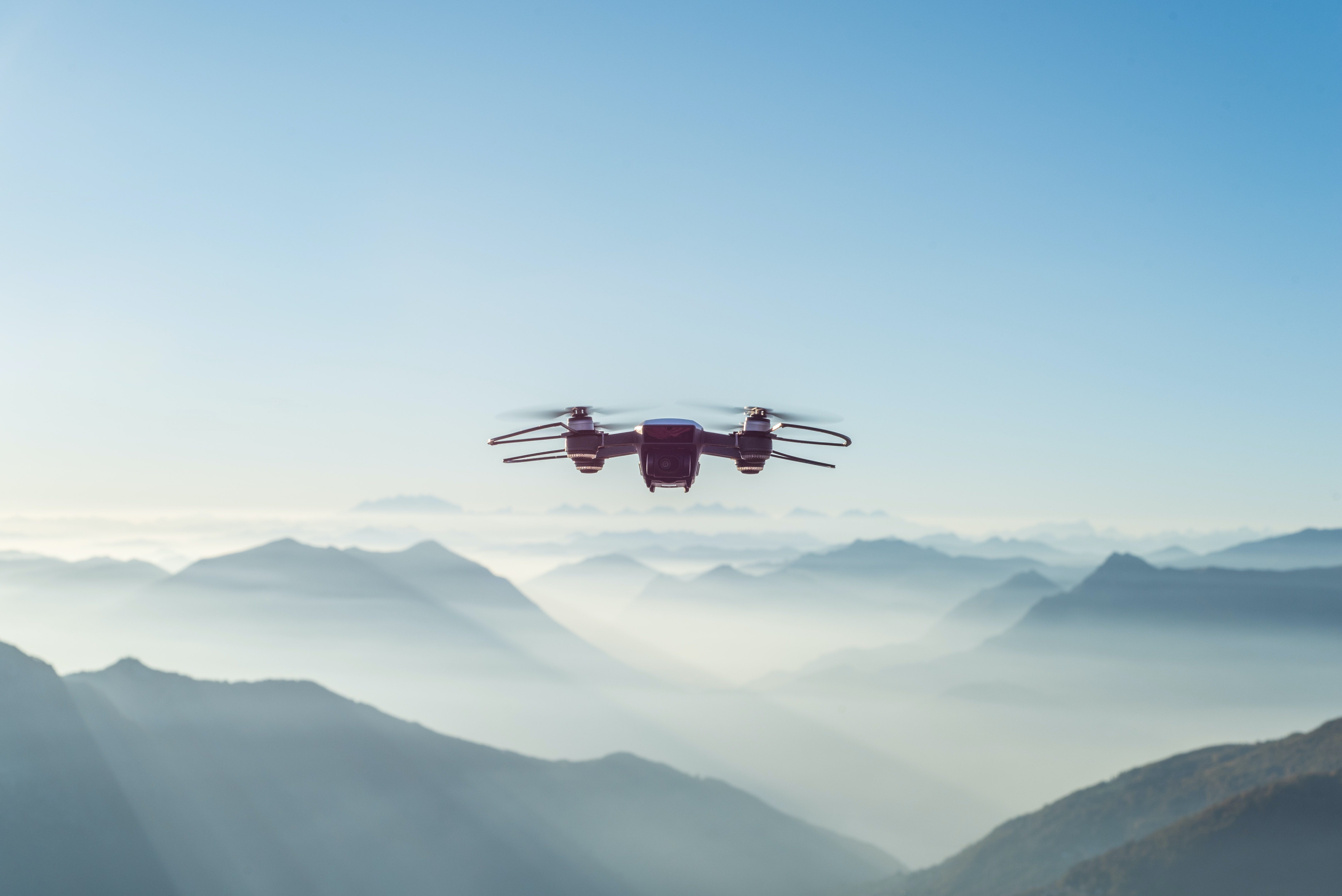 How drones could shake up the home delivery market

Sharon Scott was in a bind.

Scott, the executive director of the Montgomery County, Virginia Chamber of Commerce, is accustomed to showing proper appreciation to people. So when someone who had recently done her a favor dropped by her home unexpectedly, she felt a little awkward.

But she had an idea. Furtively, she fiddled with an app on her smartphone. A few minutes later she suggested they walk outside to enjoy the day.

Scott lives in Christiansburg, Virginia, and it was one of those perfect Blue Ridge afternoons with crisp breezes coming down off the mountains. As the two women gazed at the horizon, a distinct buzz filtered into the air. “Look at that!” Scott said, pointing in the direction of the sound. A drone came into view, and hovered above them. Slowly, it lowered a box using a string-like pulley, released it on the ground, rolled up the pulley and flew away. Scott feigned surprise, and leaned down to look at the box. “Oh, look, it’s for you!” she said to her friend.

It was a gift box of chocolate truffles. From order time to delivery: six minutes.

It’s not quite The Jetstons, but it’s close.

Delivery by drone is far from ubiquitous - in the U.S., it’s limited to a few pilot projects approved by the FAA, and is still highly regulated - but that hasn’t stopped the concept from being implemented in ways that redefine customer service, and on occasion, even save lives.

Dr. Stanley Maloy, a professor of research and technology at San Diego State University, has been studying drones for years, and his university helped facilitate an ongoing pilot project in San Diego which has UberEats delivering to certain areas of the city by drone. The very first order: bringing pizza to hungry college students. Maloy believes delivery by drones will be commonplace within five years, and will revolutionize deliveries of all sorts the way Grubhub changed the restaurant delivery industry.

A major benefit he champions is reduction in traffic. “Every time we get stuck in San Diego traffic, we’re happy to have one less driver on the road,” he says. The San Diego project began with Dominos delivering pizza to campus, but has expanded to include McDonald’s. It has rendered parts of the city a fast food mecca - Big Macs are literally falling from the sky. In most cases, the delivery process is twofold - the drone delivers to an on-the-ground delivery person, who then brings it to the customer by vehicle or even by foot, if the delivery address is close enough. It might seem laborious - but it saves time by circumventing miles of backed-up traffic, and it’s less complicated than repeatedly trying to find safe spots for food drops amid the urban area’s electrical wires, towers, and rooftops.

The Christiansburg program Scott used to impress her guest started last year, and is limited to three vendors - Walgreens, FedEx, and a small confectionary-stationary-ice cream shop in nearby Blacksburg, Virginia called Sugar Magnolia.

Tom Robb, who owns Sugar Magnolia with his wife, Michelle Robb, says his shop is pretty unique. “I like to think of it as an old soda fountain-drug store reimagined for the modern era,” he says. They first opened Sugar Magnolia in the summer of 2018, and after reading about the drone deliveries, Tom sent a shot-in-the-dark, last minute email to drone provider Wing. He thought being involved might bring welcome publicity to a fledgling business, and he was right. A few months later, Wing called and invited them to participate. Within months, their little shop was being featured in stories around the country.

It worked like this: the Robbs put together a finite number of products with reasonably long shelf lives. Tom Robb says they chose truffles and other bagged chocolates, bags of gourmet popcorn, some stationary, and greeting cards. The packages are stored at a Wing warehouse on the periphery of Christiansburg.

Customers use an app which shows them what items are available. They punch a few buttons, and within minutes the package is en route. The app communicates with the vendor about sales and inventory. For now, there’s no charge to Sugar Magnolia for the service, nor to the customer. If the program becomes a permanent fixture, that’s certain to change. Robb says he’s not sure whether the program has increased their profit line, but it has certainly raised the small business’ profile. “It’s been an incredible process,” he says. “To be the very first small business in the United States to have our products delivered by drone - it’s hard to describe. It’s something to cherish.”

The earliest “drones” - unmanned aircraft - appeared as early as 1917, and were based on radio control technology. It wasn’t until the early part of this century that drone research led to military operations that made the public take notice. Drones have dramatically increased surveillance capabilities, and have been used in warfare. But the idea to use them for deliveries is a more recent development, and excitement about drone deliveries as an industry seems to be growing exponentially.

Despite its successes, the drone delivery industry still faces obstacles. Currently, the business is limited by the FAA, with only a handful of areas enjoying the service - Christiansburg, San Diego, and a program in Raleigh, N.C. that shuttles medical samples between the area’s WakeMed hospitals.

And it’s limited with good reason - even the most enthusiastic supporters acknowledge the potential for excessive drone traffic. But technology is evolving almost daily, and the problem has been solved in other countries. In Rwanda, where the drone company Zipline has been delivering pints of blood, vaccines, and much needed medicine to remote locales, cellular data is shared between the drones and Rwanda’s main airport to minimize the chances of a collision.

There’s also the question of how far the drones can travel. They operate on battery power, which limits how far they can go. So widespread drone use would require multiple warehouses in an area with different drones operating from each one.

Drone noise is another concern. In Christiansburg, Wing seeks to minimize that problem by approaching neighborhoods from different directions so as to not continually expose the same residents to the noise.

“Look at that!” Scott said, pointing in the direction of the sound. A drone came into view, and hovered above them.

By far the most challenging issue involves an area’s topography, and how crowded it is with electric wires, cellular towers, and buildings. Right now, the FAA requires a licensed pilot to steer the drone remotely, and home deliveries are limited to residences with easily accessible yards or drives.

Christopher Snell, who owns Careful Couriers, a traditional delivery company in San Francisco, says he has trouble envisioning how drones could possibly navigate the crowded Bay Area. “If you’re a sheep farmer in Scotland, maybe a drone will come by and drop off books once a day, because that’s the best form of delivery,” he says. But drones are relatively small, and as a general rule, only carry one item at a time. “For mass distribution, I don’t think it’ll be a mainstream thing,” he says. “There’s no delivery service making money by making one delivery at a time.” He’s also skeptical of the public even embracing such a service. “I don’t know if I’d want to live in a world where drones are flying up and down my street all day.”

Maloy says it’s true that the economic benefits of drone deliveries won’t be realized at first, if at all. But that’s not the only reason to continue developing drone technology, he says. He points out that when delivery trucks are sitting in traffic, they’re hardly contributing to a company’s bottom line - but they are contributing to greenhouse gases and, by extension, global warming.

Drone deliveries may still be years away from being routine in the U.S., but - necessity being the mother of invention - it has become an indispensable part of life in other parts of the world. In Ghana, drones operated by Zipline drop yellow fever vaccines for children in remote villages. In Rwanda, Zipline uses drones to deliver more than 75 percent of the nation’s blood supplies outside of the capital.

It’s unlikely the U.S. will ever need drones for such immediate medical needs. But that doesn’t mean there’s no potential for improving lives. While Walgreens currently doesn’t deliver prescription meds via drone, it’s a possible future solution for homebound customers without other options. And it already delivers over-the-counter medications and some supplies in Virginia.

During the recent holidays, Sharon Scott’s husband started feeling ill, and Scott discovered she was out of cold meds. “I could have just gone to pick it up,” she said, but she was loathe to wade into the holiday traffic. Even Christiansburg, she says, can experience road congestion. So she picked up her phone, opened the Wing app, and ordered a “cold care package,” which included cough medicine, cough drops, and some tissues.

Within a few minutes, the package was flying through the air. It made Scott, at least, feel better immediately.