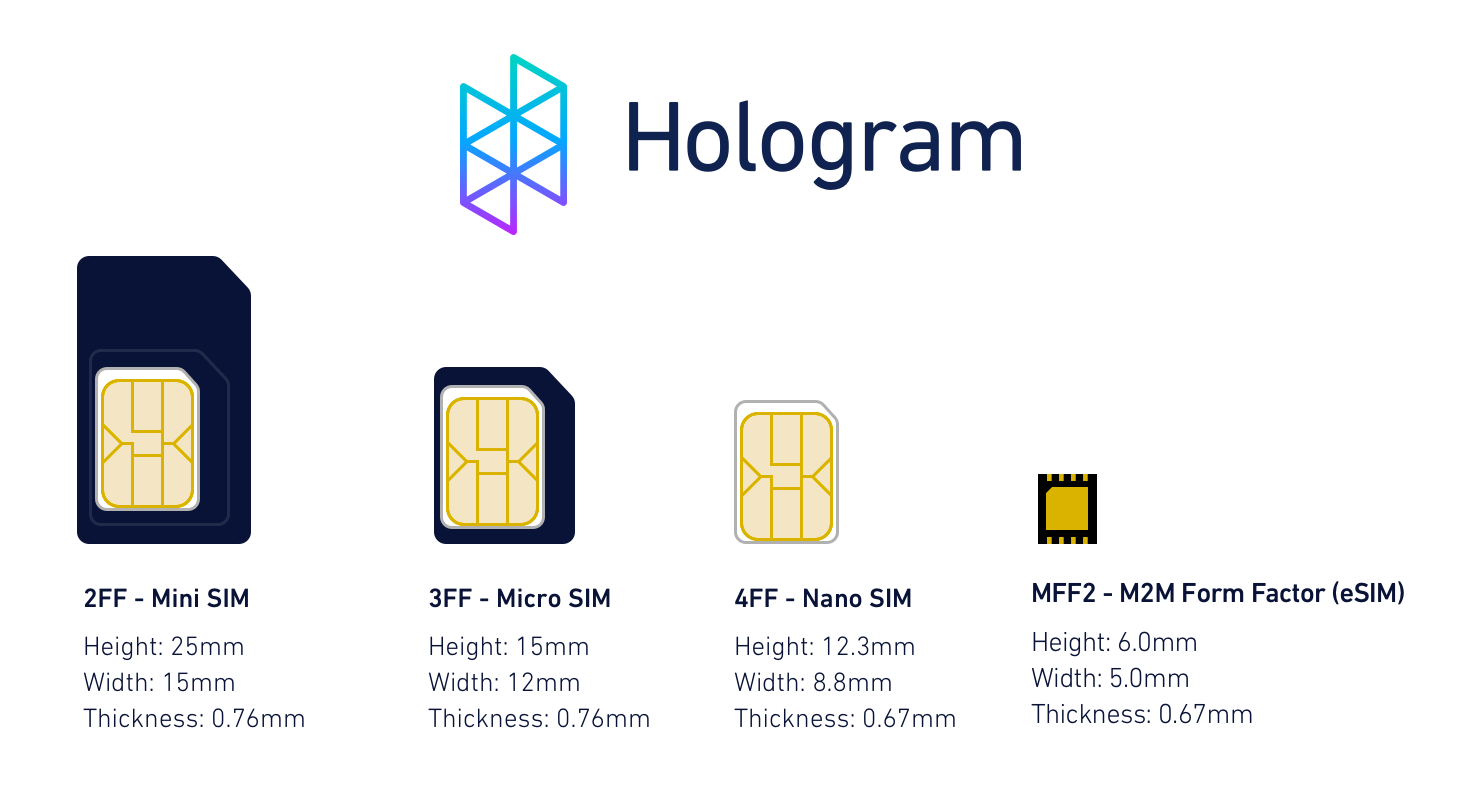 Clearing up the term “eSIM"

The hot new thing in the market (and really not that new) is the eSIM.

The SIM card has been around since the early 90s. It is a small, removable piece of silicon and copper encased in plastic. There are pads to interface to a modem or a processor, which allow the device to authenticate on a network as unique. If that unique SIM device has a plan with a carrier, the data from the modem or processor is allowed to pass through the network to some endpoint, either a server or telephony system.Here at Hologram we work with SIM cards a lot. We have our own, which we offer to developers with enough data to send about 1500 messages a month for free. We also support 500+ carriers from 150+ countries on that single SIM card. When you put one of them in your system, you immediately get access to things like Spacebridge and Multi Factor Authentication (MFA). And if you don’t have your own hardware, you can get some of the stuff that we make; all devices have a SIM card slot on them and are designed to work seamlessly with our SIM.The hot new thing in the market (and really not that new) is the eSIM. We're seeing it on devices coming into the marketplace, including products using our eSIM! Did you know we sell the Hologram SIM in an eSIM form factor? You can buy them directly on our store or you can contact our sales team if you have a larger order.

Right, but what is an eSIM?

The source of confusion is the usage of the prefix "e", a seemingly common relic of the 90s. But this does not refer to "electronic" as was so often the case (ie. eMachines, eCommerce, eMail). No, for the small VSOP chip we sell, it refers to "embedded". That is, it is a small chip that is soldered directly to a board. The official name for this form factor is MFF2. The one we distribute looks like this:[caption id="attachment_5018" align="alignnone" width="926"]

MFF2 -- Machine-2-Machine (M2M) Form Factor[/caption]It operates in the same way as our regular SIM card. There are various unique identifiers programmed on there like the UICC and the IMSI. That is used to identify your device as it communicates with nearby cellular towers. If you saw our recent announcement, Multi Factor Authentication is included, which means you're effectively soldering a security device onto your board.The obvious difference is that there is no way to remove the eSIM from the board without desoldering it from the board. That means you cannot swap out to another cellular provider. Or can you?

When your SIM card is permanent

The prospect of soldering an eSIM to a circuit board feels kind of…final…doesn’t it?With Hologram on-board, you’re safe! What’s unique about our eSIM is not being locked into a single wireless carrier. We manage networks at the software layer, which has all types of benefits. Not only the security already mentioned, but the immediate access to new features as they are available on the network. We were one of the first SIM/eSIM providers to enable 4G LTE Cat M1 and NB-IoT; this was done to devices already in the field. If you have hardware that is capable of communication on Cat M1 but not yet enabled on local towers, you can sleep soundly knowing your device will be enabled when it’s locally available.Part of the confusion in these terms is the idea of a reprogrammable SIM card. This is another technology that's been on the horizon for a while but hasn't really taken off. Why? Up until this point all of the SIM cards haven't been eSIMs. That is, they haven't been soldered down to a board. Why would you need to reprogram a SIM that is physically replaceable? Just swap it out! If you have devices deployed in the field, you know the hassle already. Replacing a physical SIM card is equivalent to a recall in terms of cost and logistics.

The confusion around reprogrammable SIMs

“An eSIM is programmable, right?”To have a truly (re)programmable SIM, it would be of type eUICC (embedded Universal Circuit Card). This means they can be reprogrammed over the air (OTA) via a method called Remote SIM provisioning (RSP). As an example: if you had a cell phone or a smart device with a SIM card in it and then sent the proper sequence of bits to firmware and they were passed to the SIM/eSIM device, you could reprogram the contents and allow your device to hop onto a new network. This would be at the device level and would be the equivalent of physically swapping out a normal, physical SIM card (mini/micro/nano types).Further confounding the playing field, iUICC is another type of reprogrammable standard, but one that will eventually go onto the device themselves. Similar to the process above, the bits to reprogram would not go into a separate piece of silicon on the board, but instead into ARM processor with a bit of secured memory. The newly programmed UICC gets written directly in there. Obviously this has concerns over how accessible this secured memory is, but for the smallest devices on the market, this seems like an inevitability; every small, battery powered device is on the path towards a single chip/module that does everything. iUICC is still in very early stages and has different requirements than eUICC.The keen eyes out there will realize with an eUICC SIM card (one that is OTA reprogrammable) is not necessary if using Hologram (which is one of the benefits of a software defined network). Our SIMs already enable instantaneous access to a broad range of carriers all over the world, without any need for being reprogrammed. This being said, Hologram is all about offering flexibility and we hope to offer eUICC in the near future. This provides the broadest range of carriers for the consumer and we think that is a good thing.

Can an expert help clear this up?

Pat Wilbur, Hologram CTO and my go-to on what’s up and coming in the communications industry, says the following:

“Software SIM" is a term that has been thrown around a lot over the years. Occasionally it refers to a form of iUICC that utilizes secure hardware memory. Sometimes more modern solutions are eUICC-compatible, but some of the older solutions are not.

In the near future, more and more devices will adopt the eUICC standards, whether utilizing a separate SIM/eSIM or utilizing a form of iUICC integrated into other modules on board, which means consumers will be able to swap between plans without removing components. We think this is a great development for OEMs and end-users alike, and offers great flexibility and fleet security advantages as well.

Should you consider soldering an eSIM onto your next product?

If you're designing your own hardware, you might want to consider it! The smaller size, fewer components and less susceptibility to mechanical de-lodging (though not common) makes the eSIM a great fit for many applications. If you're more interested in a "reprogrammable" SIM, please give us a shout! You may be surprised at what Hologram already offers in terms of coverage and technology.