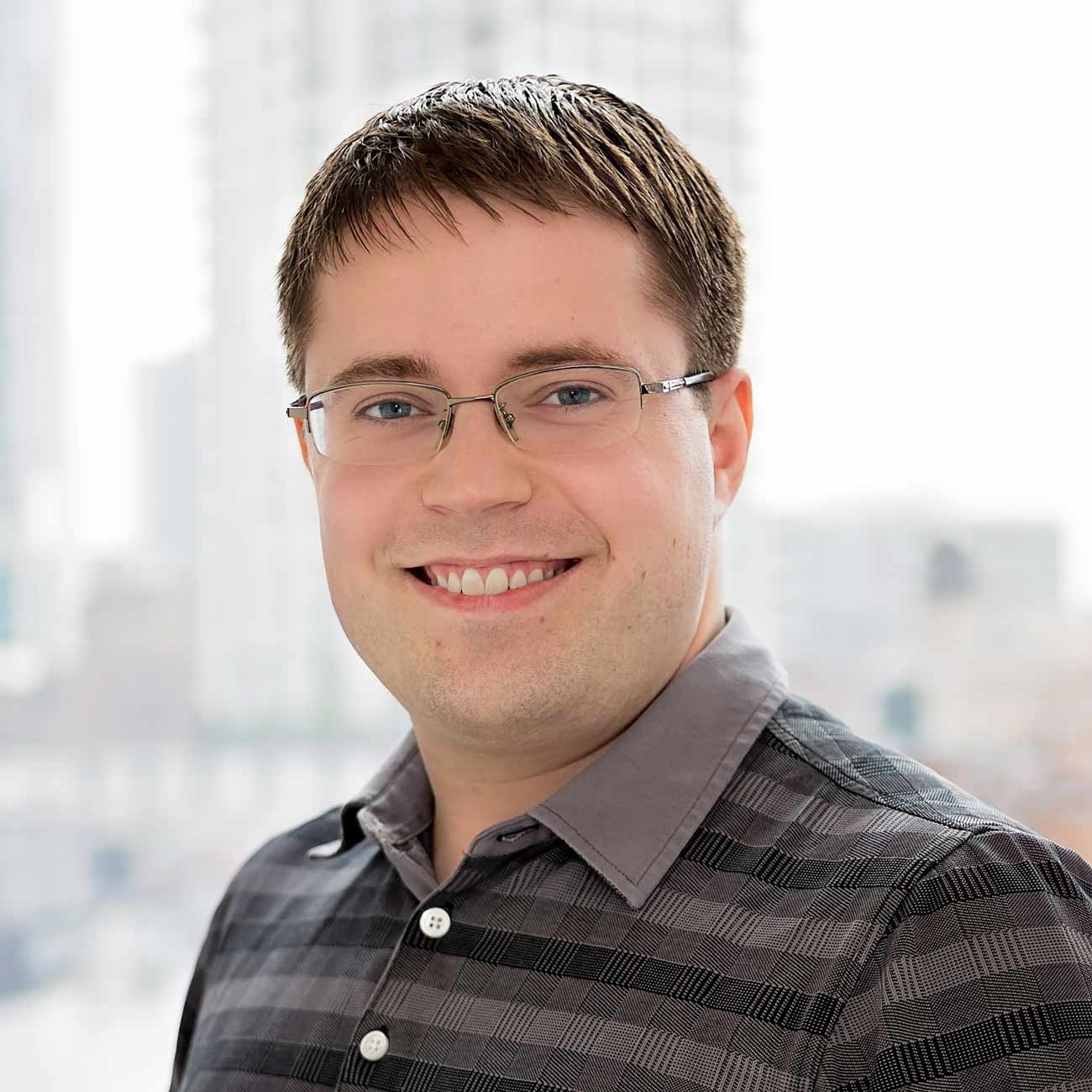 This interview is the second in a series of profiles on the great folks that work here at Hologram.My name is Flavia and I am the Executive Assistant for Hologram. I’ve been sitting down with my lovely co-workers to interview them and feature them on Hologram's blog.This week, I spoke with our exciting CTO, Patrick Wilbur.  A 30-year old proud native of the Southern Tier, NY, Pat lives with his wife Kelsey and their Mexican Jumping Beans (actual beans, not kids) and a succulent named Fred.Pat holds both a Bachelor of Science degree and pursued Ph.D. studies at Clarkson University as well.  He has worked at IBM, St. Lawrence University, and PFW Research prior to joining the Hologram team.  Pat’s favorite color is old china(TC) #182 (and his second favorite is old mauve(M) #229).As enigmatic as he is witty, Pat is the kind of person that everyone wants to know more about.  He was the unanimous selection for the next interview by all of his co-workers.  He replied to his nomination with a disarming laugh, exclaiming that he was more excited than anyone else and that he feared his head might “explode into candy.”From my first days with Hologram, I quickly realized that Pat was a wealth of information like no other.  His thoughtfulness and deep understanding of many aspects of business make him an incredible asset to the company, while his charisma and gripping story-telling ensure that he is beloved on a personal level as well.  Last week, Pat and I got on a call and I had a chance to pick his brain.Let’s get to it, shall we?

If you were the ruler of the world, what is the first thing you would change? If I was the ruler of the world - my first decree would be to add one more day to the weekend.Post-apocalyptic world. No trace of human race. It happens that you’ve survived and managed to bring with you 3 each of the following: devices, books, CDs, and movies.  What are they? 3 Devices: Pocket knife, Bicycle, and Harmonica3 Books: Gilgamesh, Basic Survival Manual, Left Behind Series (because apparently I was left behind, and I need to know what happens)3 CDs: Fat Boy Slim’s first album, Billy Joel’s Greatest Hits, Ben Folds Rockin’ the Suburbs3 Movies: Eternal Sunshine of the Spotless Mind, 3 Days of the Condor, Cast Away

Tell me what you do at Hologram. I primarily try to keep an eye on the emerging technologies and trends in the industry, and also oversee the wide breadth of technologies we are working with.  I oversee, at the high level, DevOps and how it intersects with cloud, how that intersects with security, networking, carrier relations, and all the way back to the actual cellular connectivity and our hardware.  That’s basically what I do at Hologram.  I keep everything working together, and I work to design the system as a whole on how the different components are going to integrate and respond to needs and trends we are observing in the industry.How did you come to co-found Hologram and how long have you been here? When Ben and I met, I learned that Ben had had a very similar experience to mine trying to build a cellular connected product.  They were having a hard time finding equipment that would enable you to get connected quickly, without a huge engineering and certification cost, as well as on the business side, being able to negotiate reasonable pricing was very difficult.  We saw that there was a need that nobody seemed to be filling, despite there being existing players in cellular M2M communication.  And with IoT in mind and projection of the future of IoT with cellular, we realized we were just about to enter a very important crux, where there would be a lot of interest but not a lot of solutions.  Really, no solutions!  We founded the company basically on that premise; that there is a demand here, and a lot of products that could be possible if someone on the network side could play that role of performing the carrier relations, pooling those resources together, and then building a platform and even hardware that allows companies to focus on their own value add, without having to focus on reinventing the wheel every single time someone is creating a connected product.How long ago was the company founded?The company was started in 2013 and I came on in early 2014.  I left the work I had been doing designing and implementing high-density sensor networks for IBM, and Ben and I then built up the technology offering.  When the company first started, it was offering lines of service, but there were a lot of other technologies that builders and product designers were looking for, so Ben and I started building those out.Did you know from the beginning that this was the right company for you?Yes!  When Ben pitched his ideas to create a company that would do these sorts of things in the cellular space, it was almost too good to be true for me.  I realized this was a unique opportunity to exercise my interest and experience and I immediately knew, yes, this is what I need to be doing.  This is the time and this is the right fit for me!

When thinking about the work culture at Hologram, what is it you enjoy?One of the things that I think is great about Hologram is that there is a good culture around humility and honesty and people valuing one another.  It is a very healthy dynamic where people feel like they can be genuine and they can ask for help without feeling like that somehow weakens their image to the team.  It is a strong point for our team and I think that it enables us to bond and work together, and to also remain teachable, which is very important in our industry.  With the internet of things advancing, it’s going to be a very dynamic environment over the next few years.  Now, in terms of team strength in general, we have very teachable and adaptable employees, who can accommodate almost any challenge that gets thrown their way.  And I think that sets us apart from a lot of others in this space: we have a lot more agility than many other companies.What is something interesting you have been working on recently? One of the problems that I have been working on lately is trying to make it so you can get up and running in 10 minutes time and have something that has been tried and proven, incorporating best practices for security.  The goal is so that you can have a secure IoT product in the same amount of time without any added complexities. The traditional adage is that as security increases, usability decreases.  And so, typically it is thought that security impedes users.  I have been working on that problem, and I really enjoy focusing on finding ways where it has high use and high security right out of the box.  I think this will be one of the main value-adds that our platform will be providing in the IoT security space.What is a trait you believe all leaders should strive to have?I think that part of leadership is not only casting vision, but also helping those that you are leading realize their full potential.  Having some street cred with your team is useful.  Being able to show that you can get down and dirty with the full platform stack that you are working with and you are able to make some meaningful contribution is a great way for your team to build trust in your leadership.  Having access to engineers who are working under your leadership and being able to come alongside of them and work with them on projects, and in some way mentor them along the way, is crucial for cultivating employees who actually realize and achieve their full potential.  I think that is a very important aspect of leadership, and I am excited that we are able to do this at Hologram.

What most people don't know...

Tell me about the most remote place you’ve ever been.I have been to some pretty remote areas in the wilderness. The most remote place recently would be the Grand Canyon North Rim.  The most interesting remote place I have ever been would include areas of the Adirondack Mountains.  As a hobby, friends and I have sent near space weather balloons up to land in the middle of the wilderness, and then we try to track them. That sometimes involves renting a small plane, fox hunting (beacons, not animals) in the woods, bushwhacking, crossing beaver dams to cross streams, and whatever else you might encounter while in the woods.

Tell me your biggest pet peeve.Sharing food or beverages with other people! I have certain trademark rants and one of them is about the prevalence of diseases among the US population related to sharing food and drink.  I won’t go into that right now, because most of my friends think it’s disgusting.  If you look into the research concerning it, it's actually quite interesting, especially with the trends of it in the last eight years. That has really established itself as my biggest pet peeve.As a child, what did you dream about becoming when you grew up?When I was a kid I wanted to be an astronaut until I determined that I don't really care for roller coasters very much.  At that point, the thing I really wanted to do was be an inventor.  One of the things I tried building for the longest time was a robot; unfortunately, I didn't really have the know-how for a lot of years.  Being an inventor and getting to solve problems, prototype solutions, and do experiments always appealed to me.What would kid Pat think of where you are now as a married CTO? Kid Pat would probably be surprised that adult Pat stayed in one place long enough to do those kinds of things.Tell us a secret about yourself, and make it interesting. Can it be an interesting fact?  I can sing almost every Patsy Cline hit ever.  I love karaoke, man.

We're more than just a company – our people are our passion. Read more about our wonderful employees in our Hologramers Series.