Hear about the experiences of five women working in tech and how they are standing up against stereotypes and bias.
Hologrammers
Maggie Murphy
March 8, 2022 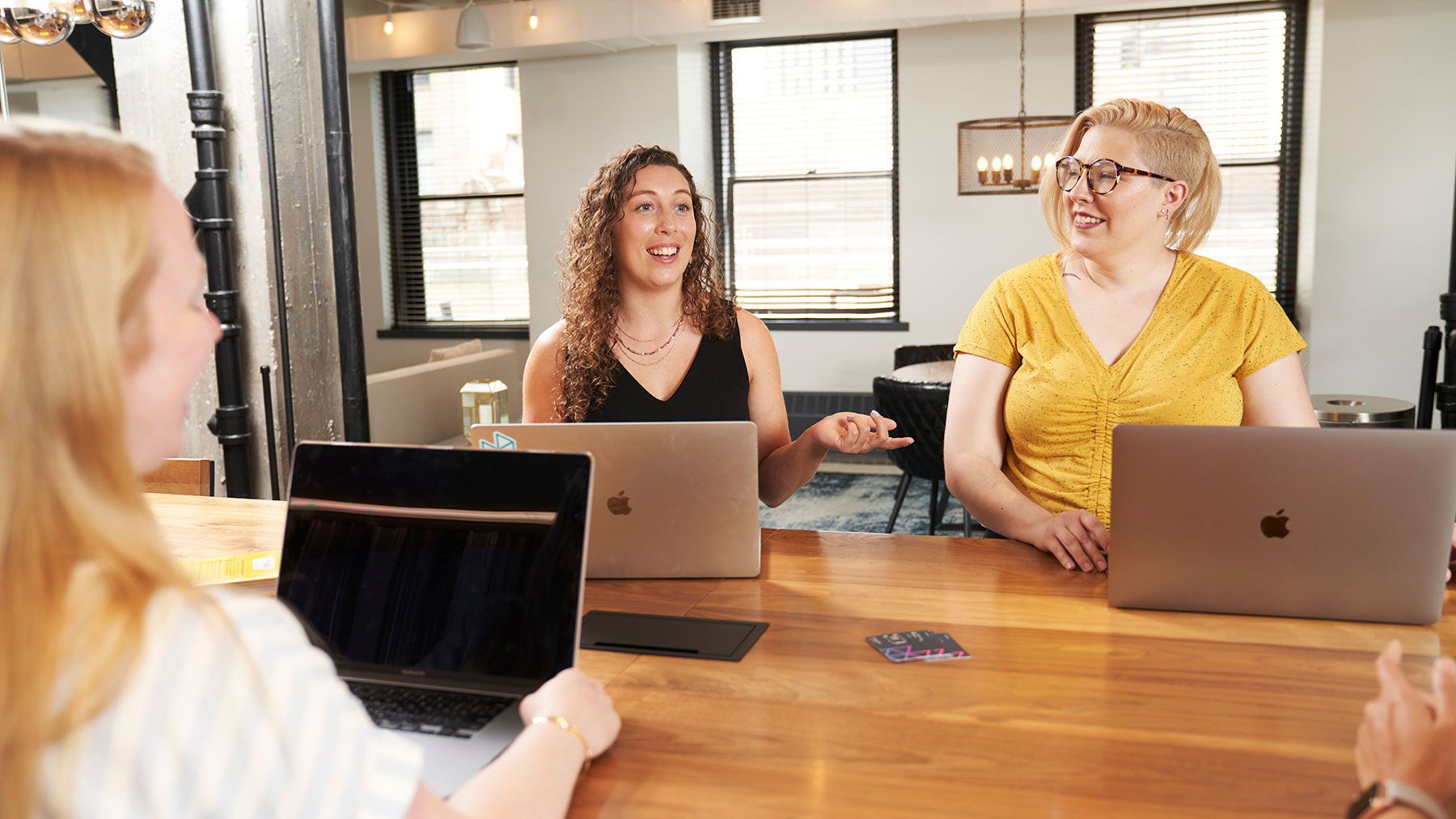 The theme for International Women’s Day this year is #BreakTheBias. And that theme feels especially relevant for women who work in technology. Even though large tech companies are making strides towards hiring women (in 2022, it is predicted that large tech companies will be 33% women),there’s still a lot of work to be done. Even though the number of women in tech is inching up year over year, only 1 in 4 technical roles are held by women — and making the technology industry more gender-inclusive doesn’t stop once the hiring is done. We still need to make the environment a safe and uplifting place for women to do their best work.

Women working in tech often have to deal with the unconscious and conscious bias of those around them who aren’t used to seeing women in technical positions and may doubt their abilities. As a result, women are often shouldered with the responsibility of proving their worth. This year for International Women’s Day, we wanted to hear from some women who work at Hologram and get some insight into their experiences working in the technology industry. Here, Arit, Allison, Anna, Leslie, and Hayley share what it means to be a woman in tech breaking the bias and paving the way for the future.

While working at a previous company, I attended a lunch meeting at a swanky country club with executives from my company and my client’s company. I was the only woman and only person of color at the table. An executive from my company made an explicit joke. I cringed, and one of the other executives looked me in the eye, and instead of using his power to call out bad behavior, he chose instead to mouth, “I’m sorry,” to me from across the table. It was a reminder that all the bravado and confidence bestowed on men in tech is often lost as soon as it’s time to stand up for marginalized groups. So we must do it ourselves. I went and filed a formal complaint, and while there were (unsurprisingly) no consequences for the male executive, I had to say something. The next time something like that happened, I respectfully called out the executive to his face; the look of shock alone as he fumbled for his words was worth the trouble.

I’ve spent the last decade of my career working in customer success at various tech companies. During that time, I’ve been ignored, dismissed, and even harassed. I’ve had to have thick skin and use my voice even when it’s been scary, and I’ve had to understand that when folks react negatively to my presence in the room, it’s much more a reflection of their bias and ignorance than it is of my ability, intellect, or right to be where I am.

They may think they have more power than you, but it’s a fallacy. No one can take your power away from you, and trust me — that’s the stuff that changes the culture. The risks we have to take to move the needle as women in tech aren’t fair and are not bred of a culture that we had a hand in building, but we can make it a little less risky for the next generation of women. Toni Morrison said, “To be given dominion over another is a hard thing; to wrest dominion over another is a wrong thing; to give dominion of yourself to another is a wicked thing.” Folks have tried to obstruct opportunities for women in tech for decades, but we don’t have to make it any easier on them. It’s an industry rich with opportunity and one where women only enhance outcomes.

It still astonishes me that, back in 2017, a software engineer thought it was a good idea to write and share a document about how women weren't naturally good at or interested in tech, and that their employer should stop pretending otherwise. Women, he said, were more interested in communication, and that was entirely separate from engineering. You might remember this as the Google diversity memo (https://www.cnet.com/tech/tech-industry/google-engineers-anti-diversity-manifesto-sparks-outrage/). Of course, in any sufficiently large group, there will be radically different viewpoints, but it's another thing entirely to have your right to belong and be treated equitably questioned so forcefully and publicly.

I immediately started questioning everything. Who else feels this way? If I have a bad day, is this person going to think I'm too emotional? Is the critique I’m receiving the same as that I would receive were I a man? These questions are always simmering beneath the surface, but the memo pushed them to the top. Self-doubt and lack of psychological safety are poisonous to an engineer’s career. If you don’t think you’ll be given a fair shake, you can’t problem-solve the way an engineer should.

As soon as the memo started making the rounds, it was clear that the majority of the company rejected the memo entirely. Hundreds of counterarguments were written and published. I’m so grateful for all of my colleagues who loudly poked every hole they could find in the memo and explicitly told me that I belonged.

One higher-up —the kind of person who had their own Wikipedia page — wrote that one of the reasons the memo was wrong was that communication is a very important skill in engineering. After all, no software engineer works in a vacuum; fundamentally, software engineering is about interfacing and solving people’s problems. There’s no reason to think that every woman in tech has a special set of soft skills, but I latched on to the idea that interfacing — communicating — was the gift that I brought to the table, and so I leaned into it. As my self-doubt and fear slowly waned and my technical skills improved, I was more able to integrate all of my skills and do work that I was truly proud of.

I spent several years of my career thinking I was the WORST COMMUNICATOR ON EARTH.* I would share an idea, and it seemed like people didn’t understand what I was saying. But later, someone would share the same idea, and it was considered a good idea. For the life of me, I couldn't figure out why people with whom I had good working relationships never seemed to understand ideas I shared in meetings.

About six years ago, I learned about unconscious bias and realized there was a very good chance that for those years where I felt like people never understood my ideas, the issue wasn’t my inability to communicate but was instead the result of unconscious bias.

I always worked with very kind, smart men, so it was hard for me to think I had been discriminated against because of my gender. When I learned about unconscious bias it helped me understand that this discrimination was very likely unconscious and completely unknown. This increased my desire to share more about the topic so people could educate themselves, because we all have bias; it’s part of who we are and what we’ve experienced.

After reading about how the women in the Obama White House used a tool they called “amplification” to combat this type of unconscious bias, I not only felt affirmed that my issues were likely the result of unconscious bias, but I also felt that I had a tool to help tackle the issue and amplify the voices of other women and other marginalized voices in future meetings.

I’ve been in the tech space for over a decade, and have been the only woman in the room on countless occasions. For many years I held that as a badge of honor, thinking that I was a trailblazer — someone who could make things easier for people who followed. But I no longer hold being the only woman in the room as a badge of honor, but rather a serious deficit that needs to be rectified. Working amongst a diverse group of people not only ensures that all voices are heard but also makes it more likely that we are building products and services for a wider variety of people.

*All caps intentional here because I found it incredibly frustrating and it severely affected my confidence and took years to unwind.

Moving the needle at Hologram

Hologram takes diversity, equity, and inclusion seriously. We understand that gender inclusivity isn't just the right thing to do, but it also means better outcomes for the whole company, which is why we are proud that 46.6% of our team is made up of persons of a marginalized gender. Every day we strive to make our company a place where calling out gender bias and discrimination is encouraged, and every team member feels safe and uplifted. If you are interested in learning more about our culture and values, check out our careers page.