What Is an edge router?: types, benefits, and features

An edge router is a device that connects an internal network to the internet. Learn more about what they do and their importance to IoT.
Connectivity
Maggie Murphy
April 7, 2022 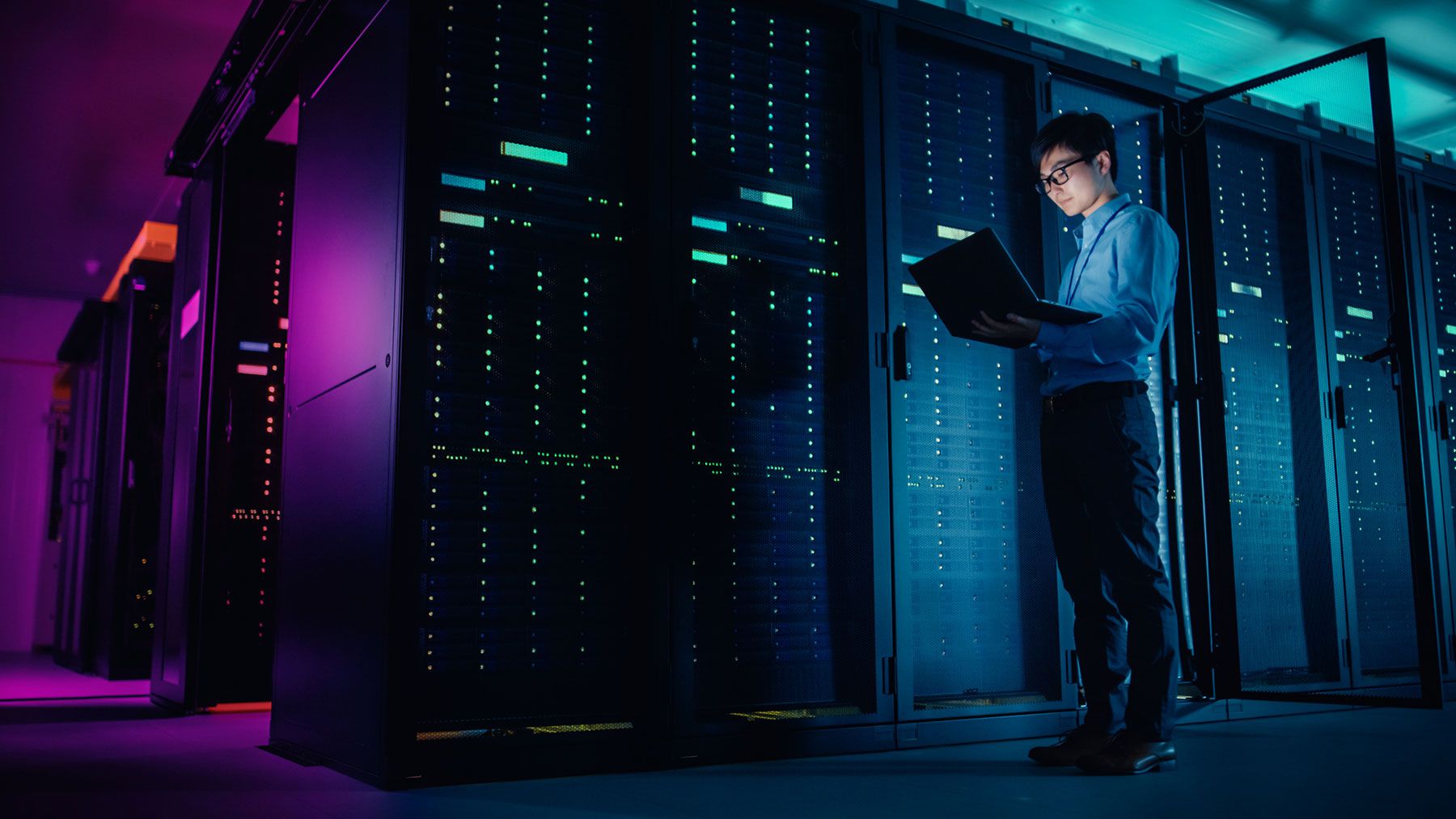 The amount of data on the internet is mind-boggling. It is estimated that Google, Amazon, Microsoft, and Facebook alone house over 1.2 million terabytes. Keeping that data organized and moving is the monumental task accomplished by routers. These hardware devices receive, organize, manage, and transmit data coming in from the internet. Without them, information would be so chaotic that the network couldn’t function. On a small scale, home routers direct information to our personal devices — like phones, laptops, and gaming systems. But large numbers of devices (like in an IoT network) need multiple routers.

What is the purpose of an edge router?

Edge routers are designed to interface with the wider internet. Think of edge routers as the gates of a walled city. They monitor who comes in and out and are ready to defend the vulnerable city center at a moment’s notice. Edge routers are used at the edge of your network, the points where your private network ends and the public network begins. The edge router is used at two main demarcation points, the internet and wide area networks (WAN). WAN are networks that connect multiple businesses or institutions but are not connected to the internet as a whole. Edge routers are able to interface with any network that an average router would. This includes 5G, broadband, satellite, or Multiprotocol Label Switching.

While the functionality of an edge router’s hardware does not vary all that much, there are some major distinctions based on how they are used within the network. In other words, any router could serve any of these functions, but some are better suited to them than others.

Route aggregation is a method developed in the 1990s to keep the internet from running out of IP addresses. It’s a process that generates a specific route for data and controls how networks determine available routes. An aggregate edge router is a router that does this task for your incoming and outgoing data to keep things running as efficiently as possible. It works by using predetermined factors to decide which data gets priority and is sent through the network first. The downside of this is that aggregate routing limits the number of open routes at any given time. Most of the time, aggregate edge routers are used for any large networks that prioritize speed. You’ll often find them in corporate or institutional networks like universities and government offices that connect users through thousands of devices.

A branch edge router sits in a ‘branch’ or a more remote location in a WAN network. Branch edge routers don’t use the same aggregation method as other routers because they don’t need to. They are mostly used for small businesses or small branch office setups, so they don’t have to deal with huge amounts of data. This branch concept also connects to edge computing, which prevents local data from being sent all the way back to the cloud for processing.

Virtual edge routing takes the job of routing away from hardware and uses software to accomplish the same task. It’s a form of network functions virtualization (NFV) — designing software to do the function of hardware. It works similarly to setting up your mobile phone as a hotspot. Virtual edge routers allow a device to become a router and the hub for your network. A drawback to this approach is speed. Hardware that was not designed to deal with input from dozens of devices can easily get overloaded. That’s why virtual edge routers are more commonly used for smaller, local networks rather than large organizations with high numbers of IoT devices.

Let’s look at a few benefits of choosing an edge router over a standard router.

Edge routers are integral parts of the firewall protecting internal networks from outside threats. All data coming into and going out of your organization’s networks must pass through at least one edge router. This funneling of data allows a single network location to be loaded down with as many safety protocols as possible. It also eliminates network back doors — if a device is connected through your network, it is going through your screening processes by default.

Quality of service (QoS) is software that prioritizes data packets for specific high-performance applications. There are four areas that QoS software can adjust. Bandwidth refers to the speed of the link. Delay is the time it takes the data packet to get to its destination. Loss is the amount of data that is lost in transit. And jitter is the irregular speed of packets on a network that can get the data out of order — leading to distortion or gaps. There are a number of causes for these issues, from outdated 3G networks to high levels of congestion. Edge routers are able to support more advanced QoS setups to help deal with these issues.

Recommended Reading: What’s the 3G sunset and how will it affect existing IoT deployments?

Much like with cloud computing, edge routers work well with remote access, allowing users to control both devices and systems from outside the actual network. This is done through virtual protected networks (VPNs) that use encryption to communicate with the edge router. While you can have a VPN on any router, edge routers offer better support in that they can permit access to thousands of VPNs at once. This means that workers can respond to the needs of the IoT network from any location with a stable wi-fi signal. Another major advantage is that since devices are interfacing with the edge router and not the VPN directly, even devices that don’t normally support a VPN can work through the edge router setup.

Recommended Reading: Edge vs. cloud: Which computing technology is for you?

Edge routers come with a number of features that can help improve any IoT network.

Edge routers can receive encrypted data and then decrypt any data packets that need verification. Web-based email, traffic to unknown sites, and online file storing and sharing all pose a notable security risk. Edge routers are able to identify those types of data packets and inspect them before letting them into your core system. They can also use similar processes to identify suspicious applications, malware, and malicious URLs to prevent them from exploiting your network. Edge routers are even able to alert you to system intrusions.

Streaming network telemetry is the collection of information on what types and how much data is going through a network at any given moment. To prevent congestion, edge routers are able to adjust the network in real-time to meet current needs. Parameters like file types, users, and applications are all considered to make the most efficient network possible.

Edge routers are built to deal what whatever the internet can throw at them. Considering that they could be interfacing with any number of devices, networks, and systems, they are able to support multiple interconnection protocols. These range from IPv4, IPv6, and MPLS, to IP routing protocols such as IS-IS (Intermediate System-to-Intermediate System), OSPF (Open Shortest Path First), and BGP (Border Gateway Protocol).

Edge routers are also able to adapt to multiple hardware needs. They are equipped with standard ethernet ports, but can also connect through 5G, Bluetooth, and other wireless protocols.

Edge routers let you manage your own security rather than outsourcing it. You are the one in control of what gets into your network because you are the one controlling the hardware. While the main function of an edge router is to route data, given the customization options, they also serve as a bulwark against network intrusion.

What Is the difference between an edge router and a core router?

If edge routers are the gates in the city walls that protect a network from the larger internet, the core router is the castle at the center of the city. It’s a device built to handle the heavy data traffic of a large business or institution. The most significant difference between the edge and core router is that the core router never connects with the internet itself. Instead, it is isolated within the network. This allows it to focus on managing the movement of data within the network to avoid congestion. Often, core routers make use of statistical multiplexing (combining information from multiple channels to be sent on a single channel) to make the core network more efficient.

Connect your edge routers to the internet of things with Hologram

Not every network needs an edge router. But if you are working with dozens or hundreds of IoT devices on the same network, edge routers are essential. From their versatility in connectivity to their heightened security, edge routers provide the stability you need for a large, complex network. But no matter how good your organization’s network is, your devices need a connection to the internet that you can rely on. Hologram’s cellular IoT network offers seamless, global coverage for IoT devices with access to LTE/4G/3G/2G technologies.